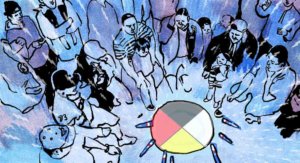 The event will include traditional dances, craftwork and the raising of the Mi’kmaq flag

This Thursday, March 22, Mount Allison will host its first powwow. This festival brings together many Indigenous people while celebrating and showcasing Indigenous cultures. “[Powwows are] the gathering of all people,” said Talon Simon, a first-year student and the powwow’s project manager and social chair. The event honours traditional music, crafts, dancing and vendors.

As the first-ever powwow on Mt. A’s campus, the event is especially significant. “I don’t believe that Mt. A has had this kind of exposure to Indigenous culture before. It’s a very big deal to have it on a university campus, let alone at a small campus with a fairly small Indigenous community,” said Kiara Bubar, a first-year student who has been involved in the planning of the event.

The celebration will welcome performers and artists from all around Atlantic Canada. Amanda Reid will be the head female dancer. “I’m really honored that they’ve asked me to be their female head dancer for their first time. It’s the first time I’ve been a head dancer at a first powwow, so that’s really special,” Reid said. “I have a lot of expectations for myself to be able to garner interest in the powwow so that people come back year after year.”

The powwow is organized by Mt. A’s Indigenous Student Support Group. “It’s the year of Indigenous action,” said Bubar. “We figured the best way to take action in that sense was to hold a powwow to really show the campus and the Sackville community that we’re here and that our culture is present.”

The day will begin with the raising of the Mi’kmaq flag that the Indigenous Student Support Group raised money to fund. Then, the festivities will move to the Athletic Centre, where there will be dances and craft vendors. “It’s come and go as you please. It’s open doors, it’s no fees,” said Simon.

Those involved feel optimistic about how the day will proceed. “Everyone I’ve talked to about this is really excited, and that’s really nice,” said Simon. “Seeing everyone excited makes me want to make this powwow great.”

Bubar also commented on the feeling of anticipation, saying, “I’m very excited because it’s one of the biggest ways that we’re able to show our culture, so I can’t wait for people to get to see it. I want people to be there and take it all in.”

The organizers ask students to respect the powwow as an alcohol- and drug- free event. Organizers also encourage everyone to attend and share in the celebration.

“Don’t be afraid to go. If you’re wondering if you fit here, go. We’re excited to have you and to celebrate this with you,” said Simon. “This powwow is for everyone.”