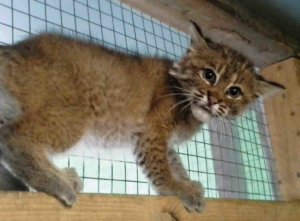 Mount Allison offers many clubs and societies that allow students to engage in the Sackville community. However, a relatively new club, the Atlantic Wildlife Institute (AWI) Mount Allison has broadened the scope, both in terms of volunteerism and location, of this community engagement.

Fourth-year biology student and president of the club, Erica Geldart, founded AWI Mount Allison, with integral support from vice president Emily Hubley, secretary/treasurer Mary Austin and former secretary/treasurer Allison Harris, a 2017 graduate. The club works in collaboration with the AWI, a non-profit organization that provides emergency care and rehabilitation for injured or orphaned wildlife and facilitates an educational forum for community and school groups. Their website says that they are “the leading wildlife response service in Atlantic Canada,” as well as “the only one licensed to handle injured or distressed migratory birds in all four Atlantic provinces.”

In her second year, Geldart, along with friends Hubley, Austin and Harris, started to spread awareness. “We received a large number of interested students by making a Facebook group, putting up posters and posting on the MASU Facebook page,” said Geldart. Members were introduced to the AWI with a tour and, later, fundraisers and get-togethers. Members were then able to go and volunteer with the animals. Though the club was not officially recognized by Mt. A at that time in terms of paperwork, this was completed in the early months of 2016, and by the 2016-17 school year the club had secured spots at both the Clubs & Societies Fair and Garnet & Gold rush during orientation week.

In explaining her inspiration to start this club, Geldart said, “Animals, specifically wildlife, [have] always been a passion of mine; therefore, coming into Mt. A, I was interested in getting experience with them.” Geldart quickly realized that there were no such forums available at the University. “I introduced the cause to Mt. A students so that others who share my passion could have the opportunity to get the same experiences that I was hoping to find.”

One of the activities that the club has undertaken is weekend volunteering, one aspect of which, Geldart explained, consists feeding wildlife, including squirrels, birds, porcupines, beavers and woodchucks. “When animals are too young to eat for themselves we will hand feed them formula. I have helped [to hand feed] a lot of squirrels, a bear, a baby bobcat and lynx,” said Geldart. Volunteers also help out by doing dishes and laundry, cleaning enclosures and cages, preparing and distributing daily meals and water, building enclosures or buildings, taking animals on walks, and, “finally and hopefully,” releasing animals back into the wild.

The involved students are able to spread awareness through Clubs & Societies fair, the Garnet & Gold Rush, environmental events and local media. There are also opportunities to attend biweekly meetings to brainstorm other fundraising ideas together.

The club also has educational aspects, such as the opportunity to attend wilderness strategy workshops, seminars and conferences either at or in collaboration with Pam Novak and Barry Rothfuss, the directors of AWI.

Novak recently visited the University campus to meet with the new group of this year’s volunteers about what the AWI is, what it does and the impact of the club. She shared that AWI had been providing emergency and rehabilitation care to Atlantic wildlife for the past 20 years. However, this is not all that they do, as they also host education and research opportunities for surrounding communities, schools and universities. They cannot do this alone; as a non-profit organization, they must rely on a community of professionals, as well as volunteers, in order to accomplish the work that they do. She expressed her appreciation for the club, saying, “We love our Mt. A volunteers.”

Caitlin McGowan, a third-year biology student recalled volunteering at AWI through the Mt. A club during the fall of last year. “I absolutely love animals and thought it would be a great way [to] learn more about the species we have around here, as well as [to] help a great cause,” she said. “There are many things that volunteers can do – from feeding, to cleaning cages and dishes … last year I even helped clean the bear enclosure!”

Shae Scully is also a third-year biology student. Though she has not been able to attend the AWI to volunteer yet this year, she expressed her appreciation for the organization. “The Atlantic Wildlife Institute is a really special spot,” she said. “It provides students with a rare opportunity to interact with wild animals in a safe environment while learning more about them.”

“Volunteering at AWI is a great way to take a step back from academics while also getting a unique [volunteering] experience,” added Catherine Fiset, a fourth-year biology student and year-long volunteer.

Geldart reflected that she likes to help this particular institute because she can feel like she is helping the wildlife, not only in a hands-on manner but also by spreading awareness. “It is important for me to give back this way because, unfortunately, humans cause many of the environmental issues that are affecting our wildlife … [This] affects the everyday interactions that wildlife have with [their] ecosystems,” she said. “I would therefore like to do my part to help the … animals that may have been impacted directly or indirectly by human activity.

Though Geldart is graduating in the spring, she has high hopes for the future of the club as they start to look for their new executive members, who will officially take over the group in May 2018. “This is a very new club but I hope that it continues to be offered at Mt. A and that it grows and improves each year,” said Geldart.

AWI is located in Cookville, N.B. If you are interested in volunteering or learning more about this organization you can visit their website, atlanticwildlife.ca, or reach out to the club through their Facebook page, AWI Mount Allison.