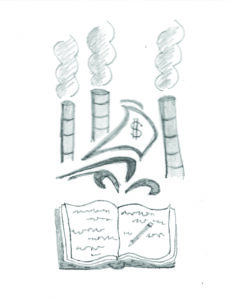 Mt. A students facing risk, insecurity, and anxiety after the program’s sudden cancellation

New Brunswick’s unemployment insurance program for students was abruptly cancelled as of June 23, and it has many students worried about financing the upcoming academic year.

The NB-EI Connect Program, created in 2016, allowed postsecondary students who worked seasonally to apply for and rely on unemployment insurance during the school year. But students found out three months into summer this year that their EI safety net no longer existed, leaving many students in a frenzy to find enough funding for tuition and the cost of living.

The provincial government, led by Progressive Conservative Party leader Blaine Higgs, decided to cancel the program as part of a larger plan to aid the labour shortage in the province. Global News also described that the program “didn’t align with the federal requirements for EI” because students are unable to seek out full-time work during the school year.

Higgs has also publicly discredited benefit programs like EI and cited them as an incentive for domestic workers to not work, forcing the labour market to outsource employees to temporary foreign workers instead.

The cancellation came as a surprise to many students and student advocacy groups.

The government released little information on the cancellation, and there have been no reports of student engagement in the decision-making process.

“They didn’t even talk to us,” says Chloe Robichaud, a third-year environmental studies student. “We weren’t even at the table helping make decisions [for us]…when I heard the news, I was scared. I was anxious. I’ve always been anxious with money, and I’m more anxious now… they’re adding this to my stress.”

Many students also disagree with the government’s justifications for cancelling the program. Naoise Moeller, a fourth-year psychology student, noted that the program was essential for many students to attend school and that student EI programs exist in many other provinces.

In a press release, the NBSA stated that the lack of notice about the cancellation right before the academic year “adds an extra barrier to students planning their finances and obtaining other funding for their education.”

Students like Robichaud were unaware of NB-EI Connect’s termination until they saw it mentioned on social media: “I know the news came out around July and I was working up in Quebec, and I saw the news on Facebook… it wasn’t in a press release or anything like that. It was just a leak from someone who got it. I don’t even know if the government’s talked about it yet.”

Robichaud stated that if she had been aware of the program’s cancellation, she would have sought out a higher-paying but more stressful job that was irrelevant to her interests.

“Sometimes I regret doing this choice because [I chose] my well-being and mental health [over] choosing money,” she said. “It feels like the government is asking me to put my mental health second because of the labour shortage.”

The consequences of cutting the program are exacerbated by the cost of living inflating significantly over the last few years. Students are forced to take on additional work, reduce their course load, or take time off to pay for school. One anonymous Mt. A student described how the cancellation “has put a lot of stress” on their life and that they are taking on two jobs in addition to studying full time to pay for food and rent.

The EI program is more than just a way for students to afford school: it is a way to make university a possibility for low-income students who would otherwise not be able to achieve a postsecondary education.

“Some people, they have their guardians that will help them financially,” Robichaud explained. “But a lot of us in New Brunswick… a lot of us don’t have parents that can help us because they’re already struggling themselves.”

New Brunswick has recently received recognition as one of the poorest per-capita provinces by Statistics Canada; with a shrinking economy, fewer jobs, and an aging population, over 100,000 New Brunswickers are living below the poverty line—over 13% of the population. As a result, New Brunswick students often identify as low-income and do not have financial support from their families that students from other provinces have.

The program’s cancellation has opened the conversation about other student groups and their financial struggles. One international Mt. A student hopes the impact the cancellation is having on New Brunswick students inspires “a little more empathy in the hearts of domestic students for international students, and how much they have to work to meet the same goal” of obtaining a Canadian degree.

Mt. A can provide some financial relief with scholarships, bursaries, loans, and funding for different opportunities. If you or a student you know is struggling financially, please contact Mt. A’s financial aid office at [email protected] to learn about eligibility requirements.