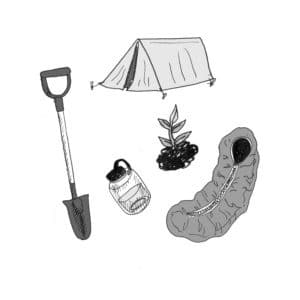 Popular in Canada, tree planting is a phenomenon in which young people spend their summers in forests across the country, planting saplings in varying terrains, usually for reforestation efforts and mostly through private companies.

Canadian tree-planting culture varies depending on the location of the job. While most tree planters in British Columbia live in bush camps while they plant, New Brunswick planters often live at home during the season.

For 60 years, J.D. Irving Corporation’s Woodlands Division has been employing students to plant trees during the summer in different regions of New Brunswick. Their website advertises good pay for the job, but cautions that the work is hard. Every year, representatives from the Woodlands Division hold an information session for interested Mount Allison students.

The Argosy spoke with current and former tree planters about their experiences tree planting in New Brunswick.

Gultaj Sangha, a fourth-year psychology student, heard about tree planting through friends and worked for Irving’s Woodlands Division for two years. “My experience planting was fantastic. The people I planted with were great people, always ready with a quip or funny anecdote to help [us] get through the monotonous days,” Sangha said.

“The pay was fantastic….You worked hard throughout the day and planted as many trees as you could, as we were paid by the number of trees we planted. The hours to begin with were quite arduous, as we started our days around 3:30 or 4 a.m. The working conditions were varied. We planted through rain or shine, only stopping for thunderstorms due to the inherent danger of being in a largely empty field.

“The Irvings treated us fairly well and were open to hearing complaints or concerns about the job,” Sangha said.

Laura Phinney, a third-year fine arts student, has planted both in New Brunswick, for Irving, and in western Canada. Phinney said planting for Irving was “so different and not nearly as fun as planting out in western Canada. It’s less organized, at least [in] my experience. You are planting in trenches, though, so it’s a lot creamier ground than the ground out West.

“[In New Brunswick] I was only getting 6 to 7 cents per tree and planted one species the entire time, whereas I got 11 to 17 cents out West and planted up to three different species a day. Here in New Brunswick, the hours are basically from 4 a.m. to 2 p.m. You meet in a parking lot and drive for an hour to two hours to the block.” Phinney said she usually planted until 1 p.m., depending on how many trees had to be planted.

Phinney said that though it was common to see planters return year after year in western Canada, she only had two or three veteran planters on her crew in New Brunswick. “Generally, way more people return to plant out West, mostly because of bush life, I would say.”

Luke Patterson, a Sackville resident and veteran tree planter, has planted in New Brunswick for both Irving and Community Forests International (CFI), an independent organization based in Sackville that focuses on sustainability. Patterson has also planted in northern Ontario.

“I really didn’t like planting for Irving,” Patterson said. “We were paid as a crew based on hectares covered that day, [which is] not great if your crew was lazy like [mine] was.

“I found the focus on quality of the planted tree was minimal [with Irving]. They used Pottiputkis, which are like a tree gun kind of thing, and they were mostly just going through the motions of planting trees, not really trying to do a good job and just focused on ‘covering ground.’ The pay was [worse than] what you can make in a per-tree or -piece work scenario. I quit Irving after two weeks.”

“The other times I’ve planted in New Brunswick were much different,” Patterson said. “I was working for CFI. It was a small crew of personal friends who were focused on doing a good job of restoring native species, not just slamming a monoculture of pulpwood species [into the ground]. We were paid well for our work and we worked reasonable hours.”

However, Patterson said that CFI isn’t an option for everyone, as it is a small crew with limited-to-no openings this year.

“You make typically more money working in Ontario and further West,” Patterson said. “I work in British Columbia and Alberta now and the pay, generally speaking, is much better. I find it much easier to get up and go out for a day of planting when I wake up in a bush camp, in my tent, as opposed to my comfortable, warm bed at my house. The overall experience is much more rewarding when you get to travel to, live and work in remote regions.”

Patterson said that planters looking to work for a private planting company might expect higher travel and equipment costs and a greater standard of difficulty.

“All that said, I think planting in New Brunswick can be a great experience, and a great summer job,” Patterson said. “You get to be outside working hard every day, you should for sure make good money and you’ll be filled with self-satisfaction at the end of the season.”

Leave a Reply to Lazy But Loving Cancel reply