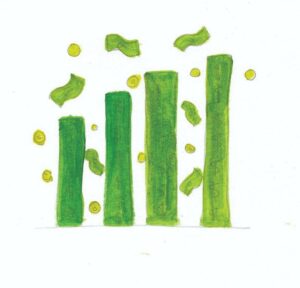 The corporatization of post-secondary education impoverishes students and enriches the institution.

Your alarm blares at exactly 8 a.m. on a Tuesday. You begrudgingly open your eyes and  force your sore body to slither out from the comforting warmth of your weighted blanket that you ordered on Amazon because sometimes you feel a little lonely. “Another day, another dollar,” you mumble to yourself in hopes of finding any sort of motivation amidst the grimness of it all.

It is time to go to work.

You make your way to the office despite the recent death of your mother because performance reviews are coming up. Finally, you sit down at your 8×6 foot cubicle under the pale office lighting, which makes even the brightest faces look like rigor mortis has set in. You open your emails and discover five more projects on top of your already dense workload because you’re “such a team player and management appreciates you,” even though they have turned down your request for a raise because “inflation is high.”

The workday ends at 5 pm but the boss asks you to stay later because “you need to make up for the work Jeff didn’t do,” as he is in the hospital for a double bypass. You stay because of performance reviews. There is no overtime as per your contract.

Finally, you get home at 8 p.m., tired and unmotivated. The dishes still aren’t done so you microwave a TV dinner. By 10 p.m. you’re in bed dozing off. Your alarm blares at 8 a.m. It is time to go to work.

What we are witnessing is the commodification of the mind, body, and soul. The individual can no longer exist when their entire selves are being rented by employers who worship the bottom line. The individual is reduced to an instrument of the corporation, and their purpose is reduced to producing value that they may see and touch but will never own. The absurdity of this lifestyle is almost comical if it weren’t for its absolute certainty.

This is the life that many of us fear. Working for a faceless corporate entity, trapped in a stuffy office working on tedious projects assigned to you by managers who do not care about you, just your productivity. Or if you’re a tradesman, your body is slowly destroyed under the intense weight of manual labour and harsh work environments. You have no vote, no choice, and no life.

As Canadians, we take pride in living in a democratic society. This country is supposedly founded on democratic liberal values where we can choose our leaders and determine our own lives.

But the workplaces we depend on to buy bread are much more authoritarian than democratic. Corporations are inherently tyrannical and undemocratic in their governance structure, leading to mass misery and alienation of their workers.

This governance structure, designed for profit accumulation, side-lines its numerous stakeholders who do not hold significant shares.

Therefore, the academic community should be alarmed to see the saddening trend of universities becoming increasingly corporatized, wherein the costs of operation are socialized among students, and revenue is subsidized by wealthy donors and corporations.

With this reduction in spending on education, the government seems to have taken an 80s style New Public Management approach.

But being subsidized by wealthy donors and organizations should be okay if they make up for the cost, right? Only if you’re fine with spending under strict limitations and conditions. That’s why Mt A’s $215 million endowment fund is left to accumulate wealth in the stock market, with their non-restricted funds reaching a 300% return on investment last year. They can’t technically spend most of those funds because they have been restricted for specific purposes by donors.

Despite growth from every revenue stream leading to millions in additional profit for the university, tuition is the highest in the province and continues to increase every year.

It seems that relying on donations is not the most efficient way of subsidizing costs if hardly any of it can be spent. Even if funds were somehow loosened, students would have no say in what to do with it because there is no student representation on the Board of Regents Executive Committee. This governing body has the power to direct the investment of the trust or endowment funds of the University.

To attract these donors, you need to maintain a friendly face and appear productive with a robust workforce. That’s why Mt A needs four vice presidents with salaries ranging from $155,000 to $229,000 and a president/vice-chancellor with a salary ranging from $305,000 to $329,000.

Compared to Mt A’s 2300 students and 500+ faculty and staff members, the University of Calgary has over 33,000 students enrolled with over 5000 academic/non-academic staff members. They only have 2 more vice presidents than Mt A.

The loss of public funding for post-secondary education has led to the proliferation of corporatized governance within universities. Mount Allison is no exception. There is a clear concentration of wealth within universities that is mostly controlled by a select number of individuals who are advised by  donors who supplied those sources of revenue. There is so much money that could be used to reduce costs for students, but it cannot be spent. Instead, it is left in the coffers of the institution, left to multiply with the excuse of long-term economic security. When is the appropriate time to cash in on that rainy day fund? Federal and provincial governments need to spend more on the minds of their citizens.

Stop privatizing the gains and socializing the losses.