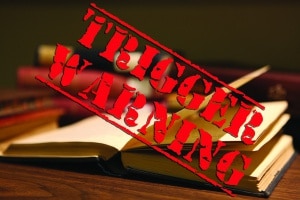 Safe spaces and trigger warnings are under fire for being anathema to free speech. And I get it – we’ve all seen the news stories, and this can get out of hand when not handled properly. But the backlash against these movements has, in my opinion, used extreme examples to generalize any movements which appeal to the mental and social wellbeing of students. The biggest complaint is that these tools are harmful to individual liberty, something which is very important to me both as a student and as a citizen. But we need to cut through all the buzz about “PC culture” and “social justice warriors” to tap into what these words really mean. While several schools have tainted the connotations of these words, I think that safe spaces and trigger warnings actually increase freedom rather than restrict it, granted they are used properly. Not all of these movements are created equally, and when we separate the good ones from the bad ones, we find a very useful (and popular) tool which does not actually compromise our liberties.

A safe space, at its most basic level, is a voluntary association of individuals assembling to escape stress and to discuss issues about which they wouldn’t feel safe discussing otherwise. This too often gets written off as “hiding from ideas you don’t like,” but in most cases that’s not relevant. This isn’t about having thin skin or entitlement, it’s about sensibility. Mental illness, rape, homophobia: These are all so marred by the stigma surrounding them that their open discussion must be relegated to the safe spaces lest they be overlooked. Having the ability to feel comfortable is hardly a matter of censorship. In fact, these spaces promote the free discussion of certain ideas rather than restricting them. Everyone deserves a place to escape, in university and in general. Having control over your environment and who you associate with, to me, is the greatest freedom of all. How we react to our environment is our choice. But it’s easier said than done. Is it really such a big deal to lend a hand and make each other’s lives easier?

But what about those pesky trigger warnings? Aren’t students using them to whitewash curricula so they don’t get offended? Think again. Professors don’t exactly go out of their way to warn people about triggering subject matter. And these triggers usually aren’t petty political quibbles. They’re clear instances of actual traumas. Being “triggered” is a real medical phenomenon for people with PTSD – it’s not a hissy fit someone has when they see something they don’t agree with buried beneath the subtext of their history lecture. Trigger warnings provide options, not prescriptions. A rape victim should not be required to sit in on a lecture about rape. We should discard the myth that they take some vaguely offensive discussion and force the instructor to nix it. Like safe spaces, they just provide people with the freedom to choose which environment they want to be in. Students should expose themselves to ideas they do not agree with, but this is not about that. It’s about making sure students don’t have panic attacks in class. Besides, these warnings are not limited to academia. Movie ratings, allergy labels on foods, TV shows dubbed “viewer discretion advised.” We’ve been letting people choose what they want to consume for decades.

Despite my reservations, I understand why these trends have gotten their reputation. At some schools, safe spaces are not an option. Some students institutionalize them to create campus-wide safe spaces so no one is triggered. These movements are motivated by politics rather than student wellbeing: Stanford University cancelling plays because they feature cultural appropriation, Ayaan Hirsi Ali being barred from speaking because she criticizes Islam, and countless pro-life groups at Canadian universities which have been barred from protesting. Carleton University even went as far as proposing a referendum which would ban all pro-life and pro-gun political activity, arguing that the latter promotes violence and the former promotes misogyny.

These examples completely reject the notions of choice and free association central to genuine movements. Rather than expanding students’ range of choices, they seek instead to regulate the ideological climate by instilling a certain wing of the political spectrum as true. I can choose to not attend plays I don’t like, I can walk away from demonstrations I don’t support. Rather than letting students draw their own conclusions about issues, these groups assume that the “liberal” opinion is the default and that any deviation from it is bigotry. It’s an incredibly presumptuous and childish trend in collegiate discourse, and I hate to see it conflated with movements toward compassion. Students should recognize that social change comes not from the top down, but from the roots, when communities come together and make choices that are good for everyone rather than mandating change through crass paternalism.

It’s important that we not let the vocal minority taint the message which is becoming so much more popular on university campuses. Because what we are looking for is empathy, not censorship. It would be quite bizarre to associate the two.