University of Regina’s students should focus on student issues, not Israel and Palestine 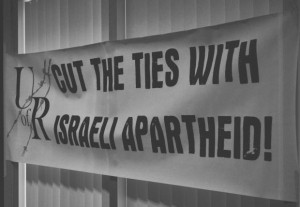 University campuses are places of social discussion, debate and protest. It was not by chance that much of the opposition to the Vietnam War and South Africa’s apartheid regime sprang from within the ivory tower. Universities matter and it is crucial that we direct our efforts to where they can do the most good.

The Boycott, Divestment, and Sanctions movement, as well as Israeli Apartheid Week, mobilize thousands of demonstrators every year and continue to increase the number of institutions disengaging with Israel.

The Israeli-Palestinian conflict is challenging in many ways. Most strikingly, it is rooted in national rivalry and a mundane political quest for power and security rather than a centuries-old ideology of racial superiority as with the South African apartheid. It is not irrelevant that Arab-Israelis have the same de jure rights and freedoms as other Israelis, though like African-Americans they suffer discrimination in practice.

Divestment and sanctions can be conceivably justified by the collateral damage caused by Israeli conflicts. These campaigns can be effective and put pressure on institutions, universities, and politicians to consider such measures as a worthy goal for student groups. Unfortunately, many students instead devote their efforts to pressuring university administrations and student unions to act on their behalf in unhelpful ways.

At the University of Regina, a campaign to prevent partnerships with universities in Israel seems to have disregarded the notion that education and cross-cultural understanding are often desirable. Moreover, universities in Israel tend to lean to the progressive side of the spectrum. Academic sanctions against Israeli universities and professors not only limit the exchange of ideas necessary to change minds and hearts, but also actively target the very people involved in finding a just solution.

Lobbying administrations and student unions to take a stance on issues and publish meaningless press releases on global politics does not contribute anything of substance to the education of students.

There is no more reason for a group of international relations or biology students to debate what to do about Israel than there is to dispute Canada’s relationship with one-party China or whether sanctions are an appropriate response to Russia’s invasion of Ukraine. While debate and discussion are effective means of sharing knowledge and communicating, these are not the issues student leaders are elected to solve, nor are they issues where a student union has any authority to speak for the feelings of its membership, particularly when this membership is involuntary.

It is reasonable for student unions to discuss matters that shape our world. It is critically important that they discuss these matters, if not for their own education, but to set an example for other students. However, when we shift these conversations from classrooms and dorms to university governance, there can be a quick shift from an organic focus on justice to a contrived focus on petty academic politics.

For a culture of engagement to thrive, our efforts need to be focused on allowing space for students to define their own politics, not on having a council define it for them. Student unions and universities work for their members as students rather that speaking for them as individuals. If you want people to take serious actions needed to make a positive change, the first thing to learn is how to speak for yourself.