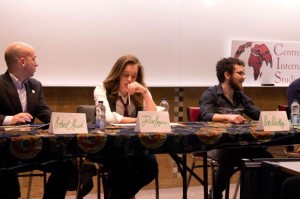 Last Thursday, the Centre for International Studies (CIS) and Global Brigades co-hosted a panel discussion on the efficacy of global volunteer trips. As it has become commonly known, voluntourism is a term that refers to the growing trend of humanitarian volunteer trips taking place in “developing’’ or “underdeveloped’’ countries. These trips are organized through a non-governmental organization which often works in conjunction with an organizer from a school. One of the participants at the panel mentioned that these trips have recently become so popular that they are basically pre-requisites for admission into certain graduate programs.

There are a number of serious problems related to these so-called humanitarian trips, many of which were discussed at the panel. The most important problem lies in the paternalistic feeling which accompanies students before, during and possibly after the trip.

In the common narrative, developed countries are rich, developing countries are poor and by visiting any developing country for a week, volunteers from wealthy countries are going to help save the children and bring the adorable villages water. In short, we are being kind and generous by volunteering to solve their problems, because we know better than they do with regards to how they should “develop.”

This feeling of superiority is dangerous for a number of different reasons. Most developed countries constructed a pattern of development that is virtually impossible for today’s “developing world’’ to replicate. Countries like the United States imposed protectionist measures which allowed them to build up their economies. Once they were strong, they opened up to trade. Latin American and African countries were not allowed to do this, because the major superpowers of the world, which by that point had already “developed,’’ wouldn’t allow it.

The volunteers tend to be students between 16 and 22 years old, and have little to no training in the field. We don’t know how to build a school and we don’t know if a school is really what the village needs. Being from Canada, or any industrialized country, does not qualify us in any way to solve a Nicaraguan or Guinean problem, whatever that problem may be. Nicaraguans or Guineans, on the other hand, know a great deal about their own needs and probably know more about building the infrastructure they might need than high school or university students. Yes, they may need funds. Sure, they might benefit from foreign experts’ help. But 16 to 22 year olds are quite the opposite of experts and also don’t have many funds for long-term support or continuous development projects.

These trips often benefit us Canadians much more than Colombians or Kenyans. As mentioned by one of the panelists, if you come back from a trip like this and do not want to change something about your life, or about the way the world or your country works, then the trip was a complete waste. The experience has value if it does indeed reveal a different world from which you’ve known.

This experience should not simply be discussed in terms of “experiencing poverty,’’ because no culture is limited to “being poor.’’ In this lies the most valuable lesson of cultural exchange trips: learning to rethink previously-held notions of poverty, development and superiority. You realize that each country is different, each country has its own problems and each country has something to offer.

It is next to impossible to get this kind of life-changing experience in one week, especially if you don’t live with a family while you are in the country. Even more so, as Maritza Fariña, a Spanish professor here at Mount Allison pointed out during the panel, if you don’t speak the language.

Seeking to help our fellow human beings is a powerful and amazing thing. But in order to help make a difference, you first have to understand their lives. For this reason, cultural exchange should be emphasized more than humanitarian trips for people who have never experienced life in the country they wish to “help,” who have no training and who probably will be gaining much more than those they seek to “help.” In some cases, this might simply mean rephrasing the goal of the trip. In others, it might mean rethinking the length, the activities and the places students live. Learning is good and cultural exchange is beautiful. Both are a necessary pre-conditions for helping to make a difference.