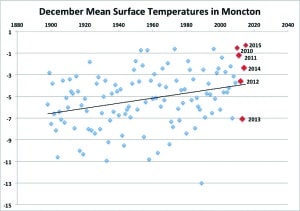 It may feel like a normal January, but this winter is unprecedented in its warmth both in New Brunswick and across Canada. A warmer-than-usual winter may be ahead of us in the wake of record-breaking temperatures and an exceptionally strong weather phenomenon known as an El Niño event. El Niño events are oscillations in surface ocean temperatures that stretch across the southern Pacific Ocean, and have impacts on weather over near-global distances.

On Jan. 20, NASA announced what climate scientists had been anticipating for months: 2015 was globally the warmest year ever recorded. 2014 had broken this record the year prior but 2015’s record exceeded the previous mark by 0.13 C, an unprecedented increase. The intensity and frequencies of these climate records breaking are considered highly indicative of human-caused climate change.

This exceptionally high heat was felt locally: Last December was the warmest ever recorded in Moncton, which has the oldest climate record in New Brunswick, going back to 1898. The average temperature over last December was -0.24 C, more than twice as warm as the previous local record set in 2010. 2010 was also the warmest year ever recorded in Moncton, with an average temperature of 7.6 C across the whole year.

While 2015 as a whole was not the warmest year ever recorded in Moncton, the record-breaking December here may be in part be due to a strong El Niño event currently taking place in the southern Pacific Ocean. According to NASA, the current El Niño event thus far appears as strong as the strongest ever recorded in 1998, and may exceed it to become the strongest. The 1998 El Niño is strongly linked to an ice storm that caused a state of emergency in Ontario and Quebec that winter.

“What we can expect with a stronger El Niño is generally warmer conditions throughout much of Canada,” said Joshua Kurek, assistant professor in the geography and environment department who teaches its weather and climate course. “Even with or without El Niño, we’ve been seeing greater winter warming…for 30 years or so.”

Whether caused by the El Niño event or by climate change, Environment Canada is predicting warmer-than-average winter temperatures for almost the entire country. They predict eastern New Brunswick has a 60- to 70-per-cent chance of being warmer than the average winter over the last 30 years.

Kurek said El Niño events affect weather throughout Canada, but that their effect is much stronger in British Columbia and the Prairie provinces than in the Maritimes. There is no clear connection between the four strongest El Niño events on record, which occurred in 1998, 1973, 1966, and 1958, and anomalous winter temperature or precipitation in Moncton. Though they appear to have little effect locally now, El Niño events are expected to intensify as the global climate changes and may affect local winter conditions more in the future.

“We know it’s a recurring event and the basic question is, ‘do we expect to see more frequent or stronger El Niños with further global climate change?’,” said Kurek. “There is a little bit of evidence for that…but we really don’t understand El Niño to the extent that we do other aspects of our climate system.”