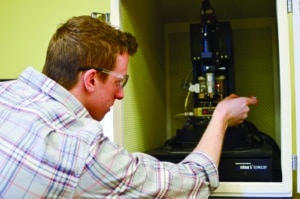 The Mount Allison graduating class of 2017 is composed of numerous outstanding students who are already making valuable contributions to the scientific community. One such person is David Hall, a fourth-year honours chemistry student whose project exemplifies the important student research being conducted at Mt. A.

Hall has had an interest in science since he was a teenager “I always liked solving problems. It doesn’t matter what they are, I just like to figure things out,” he said. This excitement of discovery led Hall to do research for the last two years in chemistry professor Vicki Meli’s physical chemistry lab, research that has culminated in his honours thesis.

A recipient of the Marjorie Young Bell Research Award, Hall stayed in Sackville last summer to focus on his honours research in nanoparticles.
Nanoparticles are particles between 1 and 100 nanometers in size, or as Hall put it, “they’re the middle [structure] between molecules and bulk materials.” They are also an area in which a lot of new and exciting research is currently taking place, because the manipulation of the size and shape of nanoparticles allows chemists to control a material’s properties.

“While there is a lot of research on the subject, there are still numerous obstacles to overcome until we see widespread use [of these materials],” Hall said. For his honours project, he investigated making nanocomposites – specifically how “capping agents affect nanoparticle integration into polystyrene.”

Capping agents are molecules that surround nanoparticles to keep them small by preventing them from aggregating. Polystyrene, a plastic polymer, is a common ingredient in many materials, most notably Styrofoam. “Essentially,” he said, “understanding this effect will be another variable we can use to make better nanocomposite materials.” Hall said the hope is that by being able to subtly affect materials and control them, one day nanocomposites could be used in electronics, in nanotechnology, as detectors or for various other purposes.

Hall’s post-convocation plans include moving to Toronto to pursue his master’s in environmental chemistry at the University of Toronto. There, Hall will work with chemistry professor Hui Peng on establishing more efficient techniques to identify the physical interactions between environmental chemicals and cellular proteins.

While this will be a new area of research for Hall, he has always been interested in multiple facets of chemistry, which explains why he “bounced around the chemistry department” at Mt. A from “organic chemistry to nanochemistry and now to environmental chemistry.”

The unique nature of Mt. A’s programs provided Hall with many opportunities, which has been a key part of his success. Hall said that he “was able to [use] $200,000 instruments” while completing his thesis, while “some schools won’t even let you do that during a master’s.” Giving students this hands-on approach to research as well as training on and access to multiple instruments is one of the reasons Mt. A produces such experienced undergraduates, Hall said. Speaking about his supervisor, Meli, Hall said that “[she] does a wonderful job exposing undergraduates to various aspects of chemistry.” Hall noted that the entire chemistry department is incredibly supportive.

In addition to his honours work, Hall was the president of Mt. A’s men’s rugby club, a member of the local Moncton rugby team and one of the Mt. A’s student refugee program coordinators.