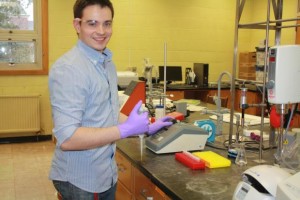 Callaghan’s thesis is entitled “regulation of lactate dehydrogenase in response to zinc oxide nanoparticle exposure in the white sucker.” His research has been ongoing for two years, under the supervision of biochemistry professor Tyson MacCormack.

Dieni, a biochemist and comparative physiologist, studies the similarities and differences in the metabolism across model organisms. Presently, his research focuses on enzumes that are likely to be phosphorylated (or dephosphorylated) in response to nanoparticle toxicity.

“This ties into the research I’ve done with MacCormack,” Callaghan said. “[MacCormack] focuses on a specific aspect and sees how it affects the fish as a whole—an ‘inside-out’ approach.”

White suckers are freshwater fish that inhabit the upper Midwest and Northeast in North America. The sucker is aptly named due to its fleshy papillose lips, used to suck up organic matter from the bottom of rivers and streams.

In order to study the fish, Callaghan places them in a feeding tank. From there, the fish are exposed to zinc oxide nanoparticles in the water. Different tissues are then tested for signs of stress and toxicity.

Nanoparticles are a billion dollar industry. Zinc oxide nanoparticles in particular are used in numerous products, including plastics, electronics, sunscreen, and various cosmetics. However, zinc oxide is insoluable in water, and through means of production, has been introduced to waterways. Research on zinc oxide nanoparticle exposure has only began in recent years—long term effects of exposure, especially on fish and other aquatic life, is still relatively unknown.

Preliminary results of Callaghan’s research is showing that most aren’t affected, but high responders are shown to downregulate their own metabolism—primarily in the muscles—to allow for their eggs to grow.

At first, Callaghan was unsure of what to study at Mt. A. It was only after taking an introductory biochemistry course that he realized how interesting it could be.

“Biochemistry answered a lot of questions that I had about biology,” Callaghan said.

Following his undergraduate, Callaghan plans to stay at Mt. A for another two years to pursue a Master’s under the supervision of Tyson MacCormack.  Callaghan’s research will take another route, as he plans to study glucose metabolism in fish.

“Fish are diabetic by nature,” Callaghan explained. “I’m interested in how they stay healthy through stress and variations in diet.”

Callaghan intends to use fish as a model for humans, as his future research could provide insight into diabetes and Alzheimer’s.