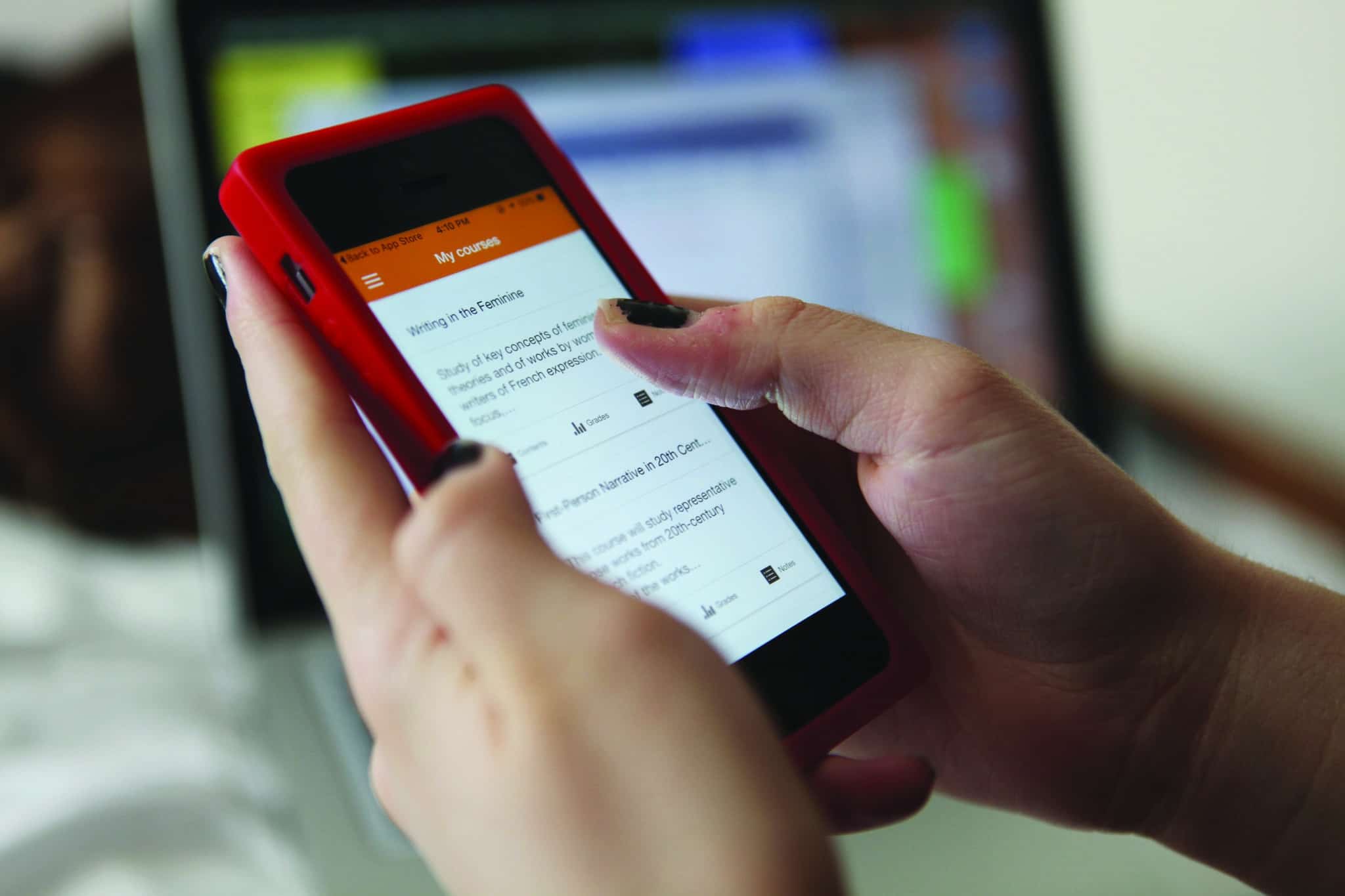 Mobile app for learning software brought to campus by students

“There’s an app for that” is now true for one of the two software programs central to education at Mount Allison. Moodle Mobile, a free mobile app developed for the open-source learning software Moodle, has launched on campus as part of a student-led class initiative. The app features options not available on a web browser and extends the software’s accessibility to the ever-increasingly ubiquitous smartphone.

The app is capable of all of Moodle’s traditional functions, such as viewing and downloading course materials and sending and receiving messages. Its most novel feature is enabling push notifications. Students will receive instantaneous notifications on their phone when they receive assignment grades or feedback, as well as before an assignment is due. Users can customize how long before a due date Moodle Mobile notifies them.

“It’s saved me couple of times in different classes […] where we had an assignment due that evening but I totally forgot to upload it,” said Jonathan Cormier, a fourth-year commerce student.

Cormier, along with Sally Landry, a fourth-year commerce student, and Zachary MacKenzie, a fourth-year aviation student, helped bring Moodle Mobile to Mt. A. An early-version mobile app for Moodle was released in 2013, and the current Moodle Mobile app was released in July 2015. While it had been available since then, computing services had not yet implemented the app for use on Mt. A’s servers.

Cormier, Landry and MacKenzie decided to pursue implementing Moodle Mobile on Mt. A’s servers as a project in their Computers and Society course taught by Laurie Ricker in the department of mathematics and computer science. Students in the class must design and execute projects which use technology for social impact. MacKenzie said their project was inspired by an honours student of Ricker’s, who is developing a mobile app for [email protected], the university’s academic administration software.

The group met with computing services several times over the fall term to discuss implementing Moodle Mobile on campus. Technicians from computing services prepared the app for use on Mt. A’s servers, while Cormier, Landry and MacKenzie promoted its use among students and explored its impact on education in the university. They’ve distributed posters around campus with a QR code which, when scanned by Snapchat, directs to the Moodle Mobile download page, and set up a booth in the Wallace McCain Student Centre on March 18 to help any students who had trouble downloading or using the app. They may also arrange for next year’s incoming first-year students to receive an information card about the app during frosh week.

“You have your phone with you a lot more than you carry your laptop,” said MacKenzie. “If you’re on a bus ride home or out on campus and you didn’t take your laptop […] you can scroll through a pdf to review on your way to class and whatnot.”

While the group has focused primarily on students who use Moodle, they said they believe professors may also find it useful. The app supports uploading documents and giving feedback on assignments as on the browser version, so may be of interest to professors.

“Obviously in a month when we finish the class and graduate, then we won’t be actively promoting the app anymore,” said Cormier.

“It started as a student-target sort of thing, but now that we’ve seen so much interest it would be more sustainable to let profs know about it,” Landry added.

The app is available to download for free on iOS, Android, Blackberry and Windows Mobile.