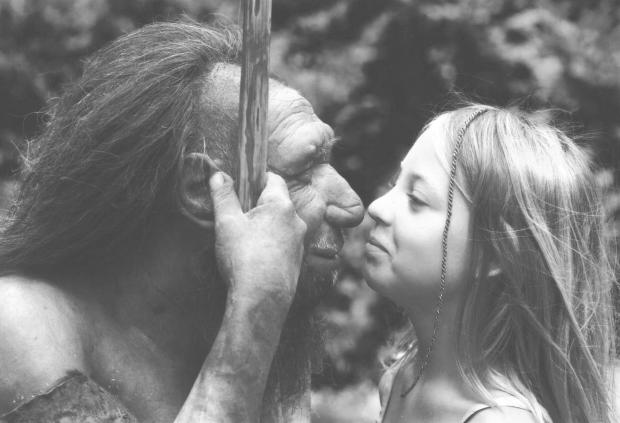 Shows when our ancestors got busy with other human species.

Just how human are we? A new finding contributes to the growing body of evidence that we are partly descended from Neanderthals, a different species of human that went extinct 28,000 years ago. The evidence comes from DNA in a 45,000-year-old thighbone belonging to a man that lived in ancient Siberia, dubbed the Ust’Ishim Man. It showed that modern humans and Neanderthals interbred 50,000 to 60,000 years ago, about twice as recently than previously hypothesized.

Scientists have known since 2010 that about 2 per cent of the DNA in non-African humans comes from Neanderthal ancestors. But there was no evidence indicating whether this interbreeding occurred before modern humans had developed complex culture, believed by scientist to be a barrier to human-Neanderthal interaction. Archeological evidence shows that modern humans and Neanderthals lived side-by-side as early as 100,000 years ago, and scientists hypothesized that this was when they interbred.

The new evidence from the Ust’Ishim Man, published on Oct. 24 in the journal Nature, shows that he was 2.3 per cent Neanderthal. By comparing the percentage of Neanderthal DNA to modern humans and other ancient human DNA, the study’s investigators were able to extrapolate when humans and Neanderthals interbred.

The findings are the first to explain why different human populations have different amounts of Neanderthal ancestry. Sub-Saharan Africans have no Neanderthal DNA, and East Asians have slightly more than other ethnic groups. This new prediction occurs well after humans migrated out of Africa, meaning that we interbred with Neanderthals over a wide area and over a long time period.

Neanderthals lived in cold, northern climates for about 200,000 years before they interbred with humans. The study’s authors hypothesize that Neanderthal genes might have helped ancient African-descended humans develop paler skin and hair, giving their progeny an advantage in places with low sunlight. The study also found that ancestral Neanderthal genes are associated with smoking addiction, Crohn’s Disease, and Type 2 Diabetes, but could not explain why.

The thighbone is the oldest human remains found outside the Middle East or Africa, and is almost twice as old as the previous oldest bone. The bone was discovered in 2008 near Ust’Ishim in southwest Siberia.

Aside from Neanderthal ancestry, the discovery gives insight into ancient human life in Siberia, as well as human dispersion across the world. Ust’Ishim Man is the oldest human evidence that has been found in Siberia, showing that humans were living there earlier than previously believed. Based on isotopes found in his bones, Ust’Ishim Man ate primarily wild plants and freshwater fish. He is related equally to North American Aboriginals and East Asians, but has no direct modern descendants. This bolsters other genetic evidence that a single group of humans split to populate North America and East Asia as early as 40,000 years ago.

The study was authored mainly by researchers from the Max Planck Institute for Evolutionary Anthropology in Leipzig, Germany, with contributions from universities and institutions in Canada, the United States, China, Russia, South Africa, Spain, and the United Kingdom.