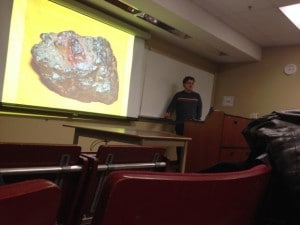 A sizeable crowd packed a classroom in Dunn this past Friday for the physics department’s monthly Starry Sackville lecture. This talk, led by Rob Weryk, was entitled ‘What do meteors tell us about the solar system?’

The talk began by giving clear definitions for meteoroids and meteorites. A meteoroid is a solid particle that is in orbit around the sun, and is produced from the decay of a comet or asteroid. Meteorites are meteoroids that originate in outer space, but survive its impact with the Earth’s surface.

The importance of studying meteors was a prevailing theme of the talk.

“They are very likely similar to the material that was present when the universe formed,” Weryk claimed. “If we can understand what meteors are made of, and where they came from in the solar system, they can give us a better understanding of what the formation and evolution of the solar system was like. We can learn exactly how the earth formed, and potentially how life on earth formed.”

Weryk discussed the formation of the solar system, which condensed out of a solar nebula, followed by the formation of a planetary disc. As material is drawn into the disc, it rotates, eventually forming planetesimals. The planetesimals eventually formed to create planets. A solar wind was responsible for the clearing of the remaining planetesimals, creating a solar system with the planets in the centre, and remnants left over that exist in the perimeter.

Various meteor-related topics were discussed throughout the talk, which included the planetesimal remnants, which we know as comets and meteors; how this material arrives on earth, from asteroids and particle ejection from comets; and meteor observations, such as the Perseid in August, and Orionid in October.

Another aspect of the talk focused on the Southern Ontario Meteor Network (SOMN).  The SOMN uses all-sky camera observations, and covers most of Southern Ontario. The intent of the network was to use a dense array of all-sky cameras, with spacing between fifty to one hundred kilometres apart, to record many meteors from multiple stations. These cameras, which are fully automated, would then use triangulation in order to determine the location of meteors in the solar system.

The ultimate goal of the SOMN is to detect unexpected events. Since its inception in 2004, the network has detected 8000 meteors, and six potential meteorite falls (with one recovery).

The talk was followed with a trip to the Gemini Observatory for any audience members who wished to look at the sky. Mount Allison professor Catherine Lovekin, who introduced the talk, cheerfully claimed that “the skies are clear tonight… we are finally going to go after the talk tonight.”