Mounties Women’s curling team “hopes to do Mt. A proud” 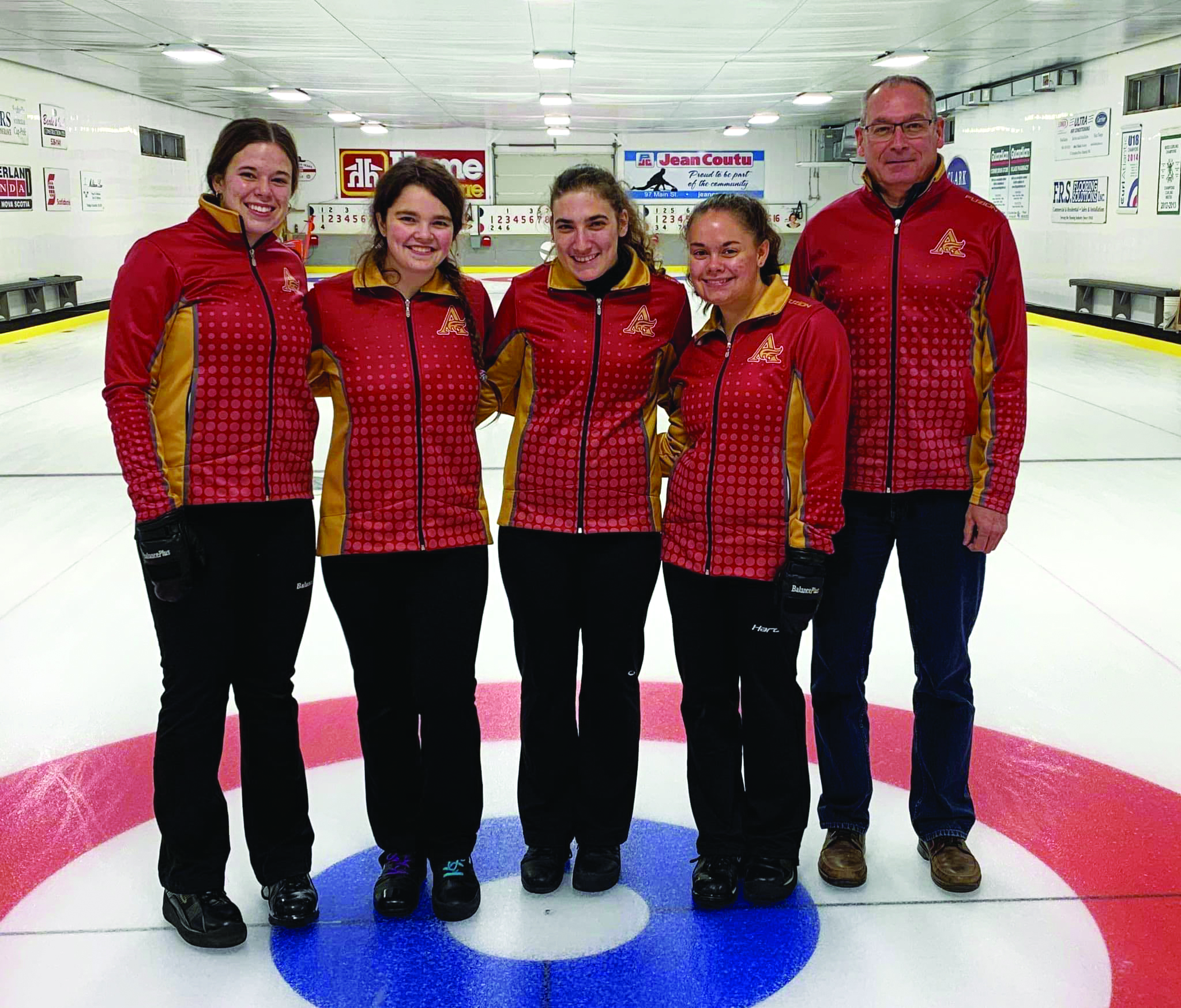 From March 17 to 19, the Mounties Women’s curling team will be competing in the AUS Championship in Windsor, NS. After the competition was cancelled last year and postponed this year, team skip Olivia Wynter says she is looking forward to it “because we’ve worked hard all season for this tournament, and it will be a great opportunity to represent Mt. A.” The team consists of Wynter, Lauren Sallaj (lead), Lauren Whiteway (second), and Ellen McKay (mate).

Wynter, a first year biochemistry student, has been curling for eight years. In addition to the strong sense of community on and off the ice, she enjoys the strategy of the game. “It is so fun to be constantly thinking about where to place your rocks. It is almost like chess,” she said. Before coming to Mt. A, Wynter curled with Sallaj in junior leagues.

“Forming this new team with Lauren and Ellen has been amazing. I always look forward to stepping on the ice with my teammates every time we play,” said Sallaj, a second year commerce student. She began curling ten years ago and is looking forward to her first AUS competition after last years’ cancellation.

Lauren Whiteway, a fifth year psychology and sociology student, has competed in two AUS championships previously, and one national USPORTS championship. She has been curling for fifteen years, including four years with the Mounties. “I enjoy curling because of the connections it creates, both on and off the ice,” she explained. “As a result of being part of the curling team, I have formed long lasting friendships.”

This is McKay’s first year on the team, but the fourth-year biology student has been curling for sixteen years, since the age of five. She appreciates how different curling is from other sports. “In other sports it’s more about contact, more aggressive, but in curling you get to take a breath and think about what you’re doing and it’s always forever changing.”

Mark Whiteway is the team’s coach this year. He has been curling for nearly forty years and coaching for fifteen. “As a coach, you get to see athletes develop and be a part of helping them reach their goals,” he said. He explained that the curling season differs from other university sports seasons. “Unlike other University sports, curling doesn’t have a schedule to compete against other Schools prior to AUS,” he said. “However, we were able to coordinate several games over the season including participating in a tournament in PEI where we jelled as a team and were very competitive.”

The team curls out of the Sackville Curling Club but also is part of a border league with the Amherst Curling Club, allowing them to compete in weekly games as well.

Curling across the border and within the province, the team has observed some of the challenges COVID-19 has posed for the sport. The team was off the ice for a few weeks in January and has faced restrictions such as masking during games and, at times, having one person sweeping a rock instead of two. McKay explained that restrictions can be very different even between close communities like Sackville and Moncton. “When we play over Nova Scotia, the rules changed again,” she said. “And across Canada, they change every week.”

One major change to the curling season was the cancellation of the national USPORTS Curling Championships that was intended to be held in Sudbury, ON later this month. “As a graduating student, I was very disappointed with the cancellation of the USPORTS national championship this year,” said Whiteway. However, she was pleased the AUS Championships would still be held. “Given the circumstances, we are so grateful for the opportunity to compete and represent Mt. A despite setbacks.”

The team also aims to represent Mt. A off the ice, hoping to share the sport with both the University and Sackville communities. For the past four years, McKay has enjoyed volunteering with the Little Rocks program at the Sackville Curling Club, which teaches curling basics to children aged four to eleven. “Four years ago, I had only seven students, and now I’m up to 30,” she said. She explained that the program has continued to run with masking, distancing, and sanitizing requirements and that “curling is one of the only things that they have had to do that’s been regularly occurring” throughout school closures. “The Mounties curling team continues to be an ambassador for the sport by volunteering our time with local youth curling programs,” said Lauren Whiteway. “In the past, we have also introduced curling to international and MASSIE students.”

While they are involved in the community, the team exists as a club sport team and therefore does not receive financial support from the Athletics Department. This has made it challenging to obtain funding to train and compete. “We are grateful for the funds we were able to secure for this season to help offset some of our costs,” said Mark Whiteway. The team primarily relies on MASU funding and personal contributions. “This has put us at a disadvantage, as other teams we will be competing against at AUS are funded,” said Lauren Whiteway. “As our sport has continued to be successful at Mount Allison, our hope is that curling will gain more support from the university.

There may be future opportunities for those interested in supporting curling at Mt. A. McKay indicated that a student league at the Sackville Curling Club may be coming back in the upcoming seasons. “There used to be student intramurals for curling, and they’re looking at bringing it back,” she said. “If the students have an interest in it, the club would very much be open to having them.”

In the meantime, the team is busy preparing for the upcoming championship with excitement and high hopes. “I’d be lying if I didn’t say I was a little nervous because it’s my first AUS championship, but my excitement definitely outweighs my nerves,” said Sallaj. “I know my teammates will have my back and I can’t wait to get started.”

McKay echoed her excitement, explaining that she was in particular looking forward to competing against the teams from Memorial University, from her home province of Newfoundland. “I’m very excited, and I think it’ll go well when we’re out there playing again. Hopefully we can get Mt. A’s second curling championship,” she said.

Wynter is happy to compete and represent Mt. A at the championship. She appreciates the support they have received from the university community. “It has been very rewarding to play a university sport, especially at Mt. A,” she said. “It gives us purpose and it is very special to have the whole community behind you.”