Embedding myself in varsity croquet 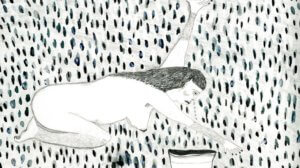 The lawn of a house party in Sackville draws a large crowd of Mount Allison students. They laugh, cheer and drink without fear of police intervention, as there’s only like two cops in Sackville and they don’t often make their way out this far. The dim lighting of party happening inside spills out onto the playing field. People gather around me, my teammate Sean and my opponents. A lit cigarette hangs out of my mouth and I get Sean to hold my beer as I line up my shot. I swing the mallet at the ball and send it rolling at breakneck speed towards the hoop. It misses because I am terrible at croquet. So is everyone playing, and no one is sober.

Mt. A’s newest varsity sports team is the varsity croquet team, and we are some of the best. Unparalleled in our complete lack of knowledge of the sport of croquet, our inability to play and our complete disregard for any rule or regulation, our only goal is to make it through the hoops and to the stake by any means necessary. It’s guerilla croquet in its purest form, lawless and intense.

As soon as me and the boys step out of the house and pull out our balls, it’s go time. Beers: cracked. Darts: lit. Tarps: off. We don’t know what the course is supposed to look like so it’s different every time – we constantly have to change our strategy and think on our feet. Due to a shortage of mallets we play in teams of two. Sean and I are one of the heaviest-hitting teams in the league. While some of the more advanced players opt for golf-like swings, I rock a “between the legs” technique, which sends balls off with about as much accuracy as I’m humanly capable of, which isn’t saying much.

To add a touch of flair, some players, myself included, will go for a move called a “one-armed Hail Mary.” This move always makes the horse girls swoon given its similarity to equestrian polo technique, which is a good or bad thing depending on who you are. I tend to save the Hail Marys for later in the game when people have started caring even less about the rules and the drinks have made me less wary of the only girl advice my dad ever gave me: avoid horse girls at all costs.

In the early stages of the game there is some regard for the rules. Don’t skip hoops, bonus shots only from passing through a hoop or in cases of ball-to-ball contact. As the game’s duration passes the one-hour mark, the number of players, spectators and shits given decrease exponentially.

At the 90-minute mark, the goal shifts from making it through hoops to making it to the stake at the end of the course. At this point, all bets are off. Croquet is generally a turn-based game, but when people start leaving for the bars there’s no longer any time to waste and a winner must be crowned. Balls fly across the lawn without precision; all we need now is to get close. We can sort the rest out later.

This is my specialty. My elongated skeletal arms create the ultimate pendulum, allowing for absolute domination. I am a force of nature, a machine fuelled by beer and cigarettes. Hail Marys only. Sean and I are the ultimate team. While I can send ’em far (when I actually hit the ball), he is much more accurate. When the game ends and the dust settles we often find ourselves in at least the top five, and that’s good enough for us.

While many varsity teams have support and recognition from the University and the AUS, varsity croquet is underground. We have no funding, all of our gear has been acquired through questionable means, and we only play under the cover of night. At the end of the day, we don’t care. All that matters to us are mallets, balls, hoops, stakes, beers, cigarettes, not wearing shirts, hard liquor, the love of a woman and, of course, croquet.