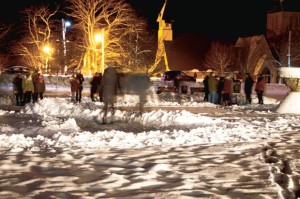 MASU’s winter carnival had students on their feet, from a frosty night of Swan Pond skating to dancing the night away on three tons of sand in the student centre.

The week was capped with a performance by Hey Rosetta in Jenning’s Meal Hall in front of a crowd of about 800 students. The concert was considered a great success.

This is the first in a series of three winter carnivals to be funded by a single referendum that was passed last year with its share of controversy involving MASU’s bylaws. After three years, any fee levied by MASU must be approved again by referendum to continue.

McKiel said that while his initial winter carnival budget of $12,000 provided by the levy was exceeded, it was worth it to get a well-known musical act such as Hey Rosetta. Ticket sales for the show brought in about another $4,000. MASU president Heather Webster said that if the carnival remained over-budget when the final numbers come in, the deficit would be covered by the surplus from MASU’s general operating budget.

McKiel said the $10,000 MASU paid for Hey Rosetta was a good deal, and only made possible because the show fit into their schedule.

“They had a show literally the day before and would be driving right through,” said McKiel.

“We had really high attendance at all of our events,” said Webster. “What was so great to see is that we attracted diverse groups of students to the events.”

The week began with a “mini-sticks” tournament, a miniaturized ball hockey tournament that saw participants lurch around Tweedie Hall on their knees, vying for Hey Rosetta tickets.

“[In] the mini-stick hockey tournament for example, we had a type of student that wouldn’t normally be engaged with the student union and come out to the usual entertainment events,” McKiel said.

“It was a great experience. Our team fought hard, came out on top, and have the knee scars to prove it,” said Sam Fellows, a third year psychology student whose team won the free tickets.

Another event included skating on swan pond with lights, music, and hot chocolate on Jan. 13.  Despite the bitter cold – the night saw a temperature low of -24 Celsius – students enjoyed the chance to socialize and skate while Sinatra and other classics played over loudspeakers.

“I really enjoyed it, I thought it was a super fun thing to have, especially as someone who has missed skating so much,” said Jane Rouse, a second year commerce student.

“First Class Splash,” a collaboration with the Grad Class Executive, saw volunteers load three tons of sand onto a dancefloor in Gracie’s for the second year in the row. The dancefloor was packed, and The Pond was at capacity.

“I think that providing great entertainment to students is something unique to MASU,” said Webster. “There are unique events that we can throw that other groups on or off campus can’t.”