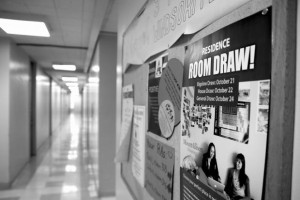 Earlier this week students who plan on returning to the university residence community took part in the room drawing process. Though room drawing usually happens in March, it was moved to October this year. In another change from last year, students can now pool their academic credits with friends to improve their standing and get rooms together.

Michelle Strain, Mount Allison University’s director of administrative services, said that the change of date is part of an effort to improve housing services.

“[It] helps current students plan where they will live next year,” Strain told The Argosy. Strain did not comment on any changes to the point system.

“It also helps the University plan for room assignments for new incoming students for next year,” she added.

This change has been received with a mixed response.

“I kind of like it,” said Sara-Jane Murdock, a second-year student.

However, Murdock expressed some concern that her academic credit standing from last year will be used to determine when she gets to pick her room. She said that in her situation, she falls in the same bracket as current first-year students. Murdock added “I would have been chosen before first-years, with a better choice of room [if the draw had taken place later on in March].”

“I just think it’s a little early because right now I’m more worried about getting through first semester than [I am] worried about next year,” she said.

Dale Springer, who has been the don of Campbell Hall for five years, believes there might be some more positive outcomes because of the change. She said students have less to worry about in the spring now that they can get the room draw over with. Springer also worries about pressure around this time of year for students to sign leases. In her experience, “there [have] been times when first-year students [get] very fearful” in the spring when they regret signing the lease. Springer applauded the MASU landlord fair, and said that the changes can help “to give the students some different options earlier in the year.”

Springer also believes that staying on campus allows students “to build a base […] a chance to meet more people and personalities,” rather than being restricted to a small group of friends who they met in their residence.

Strain and Springer said the change was driven by consultations with students.

“What we heard is that housing decisions are now being made before the Christmas break,” said Strain.

Housing at Mt. A has undergone a number changes recently, among them the closure of the satellite houses, the temporary closure and renovation of Bigelow House, as well as the new requirement that all students purchase the unlimited meal plan. Strain maintains that changes to housing are simply related to the flow of demand by students, and that room draw will remain “personalized.”