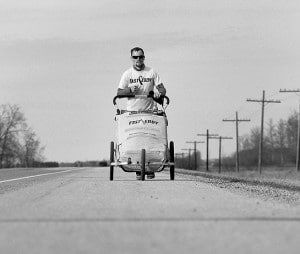 Runner visits Mt. A to fundraise for Alzheimer’s and breast cancer research

On Jan. 25, I sat down in Gracie’s and endured a very firm handshake with a tough-looking man clad in a bright pink t-shirt which read “FAST EDDY.” At 27 years old, Eddy completed his first solo and unsupported run across Canada in six months and 28 days, making him the fastest and youngest person to ever do so. He is currently in the process of running over 7,000 kilometers back to British Columbia. If he is successful, Eddy will be the first person to ever run across Canada and back.

“I detest running, but how many people bike every year?”

Edward Dostaler, who runs under the pseudonym of Fast Eddy, first ran out of Victoria, B.C. on March 1, 2015. He said he averaged 60 km per day as he pushed all his camping essentials across the country in a stroller weighing about 140 pounds. Dostaler arrived in St. John’s, N.L. on Sept. 28, 2015.

Dostaler is running to raise money for Alzheimer’s and breast cancer research. All donations stay in province and go to the provincial research chapters for each cause. Dostaler said he decided to run because he wanted to make a difference. He was disillusioned by people talking about making an impact but not acting. “I’m very blunt,” said Dostaler. “There’s no sugar-coating this bitter pill.

“I detest running, but how many people bike every year? Over 400. How many people run? One, maybe,” he said. To date, only six people have run unsupported across the country.

Dostaler said the hardest part of the journey has been getting people involved in his cause.

In the middle of our talk, Dostaler got up, concealed his pink shirt, and proceeded to ask students in Gracie’s if they had ever heard of a man named Fast Eddy who was running across the country and back for breast cancer and Alzheimer’s research. No one he asked had heard of his efforts.

“We just asked six people whether or not they’d heard of it, and no one had,” said Dostaler. “That’s definitely not a good feeling when you’ve already been through the area.”

Jenna MacKinnon, president of Mount Allison’s Healthcare Outreach club, said they are looking to support and raise awareness for Fast Eddy’s cause. Healthcare Outreach organized a “mustache and melons” fundraiser party at the end of November and was able to raise $600 for breast cancer research.

Dostaler said, to date, he has raised $6,000 for breast cancer research. He is unable to find out how much has been raised for Alzheimer’s research because the provincial chapters do not share their information. After almost a year away from home, he said fewer than 100 people have donated to his cause.

Due to winter conditions and the intention of speaking at more schools and events, Dostaler is now running with his car instead of his stroller. His average day entails running 10 km up the road and then running or finding a ride back to his car, and repeating the process.

Fast Eddy hopes to make it back to Victoria by Christmas.

Donations can be made at