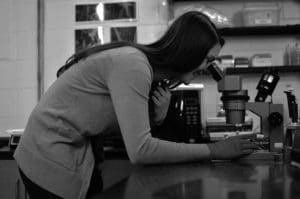 Have you ever wondered what a science student’s honours research looks like? As an international relations student, I was intrigued to gain insight into the life of a science student at Mount Allison.

I sat down with fourth-year honours biology student Tierza Petersen to discuss her research. Petersen is working under Karen Crosby, a Mt. A professor who began this research as part of  her PhD.

Petersen summarized her research for those of us who are unfamiliar with scientific terms. “There are a bunch of connections in the brain. The place that we’re looking at in the hypothalamus projects to another part of the hypothalamus that is involved in appetite regulation. If one area is synapsing on another area, [this first area] is likely involved in appetite regulation as well.”

Petersen said she and her colleagues are working with two different signals, or systems, in the hypothalamus that influence appetite.

“One of these systems is the cannabinoid system. [Our cannabinoid system] has similar properties to weed, but it’s endogenous to our bodies, [meaning that our bodies produce it]. In other words, our bodies actually make chemicals that are similar to THC, and that’s why THC is active in our body. That’s why if someone were to theoretically have THC in their body, it could make them hungry – because it’s that interaction in the brain that’s making you hungry.”

The same thing occurs with the chemicals produced by our cannabinoid system: They are involved in whether or not we feel hungry. “The second signal we focus on is nitric oxide, which is a common gas. That’s another one of the signals in the brain,” Petersen continued.

Petersen explained that both our cannabinoid system and nitric oxide influence the way our neurons communicate with each other and are involved in whether or not we feel hungry.

“Usually, when you have a cannabinoid signal, it increases food intake, but from what we found in young rats, the signalling is different than in adult rats. In young rats, if you block the nitric oxide signal, and subsequently administer cannabinoids, it decreases their food intake,” she said.

“This is contrary to what is typically expected,” Petersen said. We know, for example, that when we put THC into our bodies, we usually get hungry. That’s why this reaction – rats being less hungry when they are given cannabinoids and have the nitric oxide signal blocked – is unexpected.

“I’m not really sure how or why it [makes young rats eat less] – that’s what we’re trying to figure out,” Petersen said. “The long-term goal is to eventually relate it to obesity in humans.”

Petersen is graduating this year and is going on to graduate school, either at Carleton University in neuroscience, or the University of Toronto in biomedical engineering. She said her research at Mt. A has influenced what she wants to do post-graduation.

“I love it,” Petersen said of her research. “I want to go into some sort of research or academia related to neuroscience. [This research] has helped give me an idea of what I want to do.”