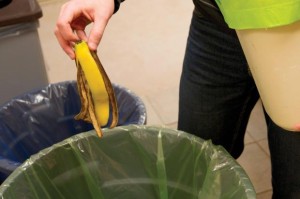 If Sackville’s blue-green garbage system confuses you, a new study shows you may not be alone. Eco-Action conducted a study suggesting many Mount Allison students do not understand the waste management system used on campus.

Of the 236 students surveyed, 38 per cent “simply do not understand” the system, and 90 per cent said the university’s provision of education was “inadequate.”

“I sort of understand the general idea of it, but I don’t really understand all the details,” first-year Emma Brown said. “I think there needs to be more information, and maybe simplify or streamline the system.”

The current system, called the two stream program, provides two options for waste disposal: a blue bag and a green bag. The blue bag is for solid, dry garbage and the green bag is for liquid, wet garbage, including compostable waste.

“I personally am a little bit pessimistic that we would ever be able to get to the position where the system would be understood and appreciated and respected by enough people in the Mount Allison community for it to ever be utilized properly,” said Lauren Latour, a fourth-year environmental studies student who led an environment audit on campus in 2014.

The survey also found 57 per cent of students reportedly conform to the waste management system. But for the system to effectively divert waste from landfill, much higher participation rates are required.

“It’s important to understand how this system works,” said Graham May, a fourth-year double major in environmental studies and international relations. “It’s set up in such a way that if any say blue waste ends up in a green bag, or vice-versa, that bag becomes contaminated and it goes straight to the landfill.”

The confusion extends beyond Mt. A.

According to a CBC article in 2013, “more than half the 200,000 residents in southeastern New Brunswick are not properly sorting their garbage in order to divert it from the landfill site.”

While some students think this can change with better education, others are more skeptical and believe Mt. A needs a more familiar and intuitive system.

“Most people are used to a three-stream system,” Latour said. “Whereas blue-green, wet-dry, I don’t know, it seems more of a nebulous concept.”

The solid waste commission, RecycleSENB, and university staff have discussed the possibility of an alternative system, but progress has been slow.

“They are talking about a third stream, and we are looking into it at the moment,” said Rob MacCormack, the director of facilities management.

MacCormack said that in theory the three stream system makes the decision of where to throw out waste more intuitive, and that they are collaborating with RecycleSENB to develop a program.

But some students have said the process is taking too long.

“The university is not really making any progress on that,” May said. “They are more or less just twiddling their thumbs.”