MASU executive election results are in 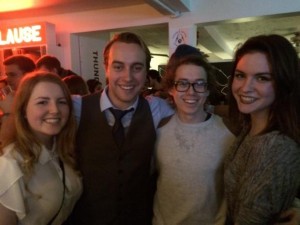 Wooley-Berry, a second-year international relations student, was the first victor announced and will serve as next year’s MASU president. Wooley-Berry, who is currently Harper Hall’s president, was elected by students with 46.42 per cent of vote in the first round, receiving 80.99 per cent in the second round. 34.60 per cent went to his opponent, Arts Senator Piper Riley Thompson, in the first round. 244 students out of 1,284 voters abstained from voting a presidential candidate.

“She [Riley Thompson] was a great competitor and since the day she got to this school, she has advocated and fought for students’ and their interests and I sincerely, sincerely hope she will continue to do so next year in some sort of capacity,” said Wooley-Berry, “She is someone I want on my team.”

This election was the first time the position of president has been had more than one candidate since executive elections in January of 2012.

“One of the reasons I ran is because I knew our organization would be stronger if there was a competitive election,” said Wooley-Berry “you have the best ideas rise to the top and those ideas are the ideas of the students.” Wooley-Berry said there will be a list of MASU’s priorities for next year released to students, pending the hiring of a vice-president of communications.

Mary Emma MacNeil was elected vice-president of academic affairs with 52.26 per cent in the first round. 37.80 per cent went to her opponent, off-campus councillor Cole Murphy. This will be MacNeil’s first time sitting on council.

MacNeil is in no rush.“Personally, I feel like because Steven [Black] has been so active in council this year and working with Kyle Nimmrichter, that it would be in the students’ best interest for me to wait,” MacNeil said.

Third-year international relations and economics major, Ryan Lebreton, was elected vice-president of campus life. Lebreton received 53.60 per cent of the votes; his opponent, Hunton residence assistant Delaney Losier received 38.48 per cent. Lebreton sat on campus this year as an off-campus councillor and hopes to finish his work on the off-campus meal plan proposal before he starts in office.

The current vice-president of external affairs, Annie Sherry, was re-elected and will fill the position for a second time in her fourth year of studies. Sherry, a third-year sociology student, was the only unopposed candidate in this election and received 86.02 percent ‘yes’ votes, 92 abstentions, and 82 ‘no’ votes.

Sherry ran on a slate, supporting presidential candidate Piper Riley Thompson throughout their campaigns, but says she is still excited to work with the president elect.

“From the beginning, I was happy to work with either,” said Sherry, “I’m really excited to see him [Wooley-Berry] get involved in our external organizations.”

Sherry commented on being the only elected executive serving a two year term in her position. “I think that any of these elected positions would really benefit from having a two year term,” said Sherry. “It allows for a lot of consistency.” Sherry said some parts of the job are easier after more than one year of work, such as increased familiarity with  the CASA and NBSA bylaws.

“I think it’s going to be a good year, externally,” said Sherry. “I’m looking forward to it.”