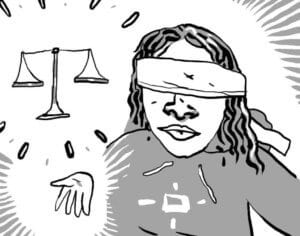 Invited to Mount Allison by Tina Oh and Shannon Power, student coordinators of the Centre for International Studies, Francis said, “We are hoping to bring a new lens to justice.”

“I’m hoping to provoke everyone and make everyone a little uncomfortable,” she said early in the event. She acknowledged that people will necessarily have differing opinions on the subject matter of her talk. Francis expressed that her goal was not to indoctrinate the audience; her intention was “[to ask] everyone tonight to look at it differently, to look at it not from a place of mind but also a place of heart.”

She began the talk by summarizing her own experiences with the justice system. She and her husband had recently bought a home in Toronto when, one night, the police raided her house and arrested her husband, who was sentenced to seven years in prison for gang involvement.

“My children had firearms in their faces,” Francis said. After the raid, she said, “Nobody would speak to me, nobody would play with my children.” Francis raised the question of whether the perpetrator truly bears the weight of an incarceration, or whether their loved ones do.

This experience inspired her to found FIBI, an organization that aims to deliver holistic aid both to those who spend time in prisons and to their loved ones. “Family is key. It’s an early point of intervention,” she said. “It all begins at home – it’s the cause [of early criminal activity in some cases] and the cure.”

Her programs aim to support former inmates by delivering “education, life experience [and] health,” in addition to financial support. She also mentioned initiatives to overcome barriers to reintegration into society, such as instructional programs focused on technological literacy.

“When I think about justice, I am torn,” she said, ending the talk. She and her family were able to overcome challenges associated with her husband’s incarceration, but she knows that not all families are able to do so. “Public safety doesn’t look like longer minimum sentences,” Francis said, strongly stating the importance for policy-makers to draft policy that reflects the personal experiences of inmates and their families. “It is not enough for us to be theoretical,” said Francis.

The topic of prison reform caught Power’s eye “after encountering certain thinkers like Angela Davis and others who show that simply putting people in prisons does not actually make the world safer, especially for communities that are disproportionately policed,” she said.

“I became interested in prison justice because I have a family impacted by incarceration,” added Oh. “You don’t truly realize the injustices in the system until you see your loved ones go through it.”

At the end of the event, Oh and Power announced that the next talk put on by the Centre for International Studies will feature Dr. Paulette Steeves, and will take place on March 22.