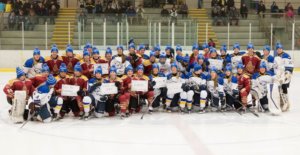 An eventful weekend for athletics

On Friday, Jan. 24, the women’s volleyball team hosted Pack the Mac, an event aimed to fill the McCormick Gym with fans.

The team played an intense game against Holland College, losing three sets to one. The proceeds from the 50/50 raffle ticket sales were donated to the Student-Athlete Mental Health Initiative (SAMHI). SAMHI is an organization that works in universities like Mt. A, forming clubs and societies centred around mental health education and awareness in regards to student athletes.

“I had never watched many volleyball games before I came to Mount Allison, but our volleyball team always has such a great energy on the court,” said Linnea Bidder, a second-year student and volleyball fan. “The advertising for the Pack the Mac event paid off since the gym filled up right before the game started and made for such an exciting match.”

“The fans offered a huge amount of support for the team which allowed them to perform an amazing mental game,” said Danielle Dickson, a second-year student. “It was a great way to promote mental health awareness in a setting with a big student turnout.”

“Bell Let’s Talk day makes people realize that structural changes in the system and in our society are needed to improve mental health,” said said second-year setter Sophie Landry. “I think it’s important for everyone to know that it’s okay to take a break and be vulnerable. Our team is family first; everyone supports everyone.”

On Saturday, Jan. 25, the women’s hockey team faced the Université de Moncton in support of Bell Let’s Talk. It was announced that the proceeds from their 50/50 raffle ticket sales would be donated to unspecified Sackville mental health initiatives. Items such as hats, posters and banners were given out to fans in the arena to promote awareness around mental health. Ultimately, the Mounties’ efforts fell just short of a victory as they lost 2-1.

“Bell Let’s Talk is important because it brings the community together. It helps promote an important message: that talking about mental health is an important first step towards lasting change,” said first-year guard Ashley Hamilton.

“The Bell Let’s Talk games were really successful this year. We had a lot of people come out to support both teams,” said third-year guard Cole Smolensky. “We hope these games continue to be a success in the future.”

The basketball teams went on to face the Holland College Hurricanes on Sunday, Jan. 26. The proceeds from the 50/50 ticket sales were all donated to Mt. A’s Wellness Centre. The men’s team took a tough loss, losing their winning streak with a close final score of 76-72. The women’s team lost with a final score of 60-57.

“Bell Let’s Talk is important because it raises awareness surrounding mental health and it opens up the conversation,” said Smolensky.

Bell Let’s Talk has raised millions of dollars for mental health initiatives in Canada. The campaign provides access to resources, online networking and a platform for those who need it.

The Wellness Centre is an on-campus mental health-care option for students in the bottom floor of the Wallace McCain Student Centre. Students can also reach out to organizations such as the Chimo Helpline based out of Fredericton (1-800-667-5005), Crisis Services Canada (1-833-456-4566) or Hope For Wellness (1-855-242-3310). For more information, email the Wellness Centre at [email protected]