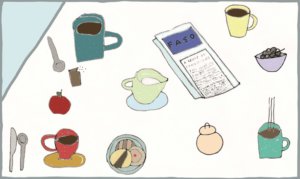 The Breakfast Chat, which is funded by the Atlantic Chapter of the Royal Society of Canada, provides an opportunity for Mt. A students and the public to talk about issues in science and health in an informal setting.

Azar started by welcoming the attendees and inviting them to get to know each other over breakfast.

After the meal, Azar introduced the topic of the discussion, fetal alcohol spectrum disorder (FASD), and invited the program manager of the New Brunswick FASD Centre of Excellence, Annette Cormier, to speak.

Cormier gave some general information about FASD and its impact on the brain and the body, saying that it is a lifelong condition and can lead to  “physical issues and problems in motor skills learning, memory, attention, communication, emotional regulation and social skills.”

She also emphasized the importance of supporting the families of children with FASD, “Because if the family is stable, the child will have a much easier transition.”

Cormier noted that around 61 per cent of all pregnancies are unplanned, so many people consume alcohol during the early months of pregnancy, before knowing they are pregnant.

A diagnosis of FASD is often surrounded by stigma, sensitivity and shame; “This is one thing that we need to change, because we know that no mom would harm her baby intentionally,” said Cormier.

She explained that many kids with FASD have a hard time understanding concepts like rules, values and other abstract ideas. “We have to give them time to process new information,” said Cormier. “They need the right support and an early intervention to learn.”

Cormier concluded by saying, “It is not about changing the children, but changing their environment and making life easier for them.”

The second to speak was Dr. Lori Vitale Cox, the founder and director of the Eastern Door Centre in Elsipogtog First Nation and adjunct professor of pediatric medicine at UBC.

Vitale Cox spoke about the centre’s work in Elsipogtog First Nation and the schools there.

“I have to point out that it is not only an Indigenous community problem,” Vitale Cox said. “Indigenous women drink less than people in the mainstream, but their pattern of drinking is a binge pattern, which is harder on the baby.”

She emphasized the rights of FASD individuals and how we have to understand their needs. “We have to support them, and this will bring the change to the kid’s life,” she said.

Dr. Erin Atkinson, a licensed psychologist who works for the Anglophone South School District, talked about her interest in this field and the importance of understanding the many different aspects of this syndrome.

She focused on the importance of creating consistency between home and school. “We can support parents to implement the strategies we are working with at school,” Atkinson said. She mentioned some other ways of supporting FASD children, like providing them with a support person to help navigate social environments.

Atkinson also discussed the difficulties of asking parents about prenatal alcohol exposure: “We don’t want to make the mom feel judged,” she said. “It is important to be able to have an open conversation and address FASD without judgment.”

Françoise Corbin-Boucher, a mother from Moncton, spoke about her youngest child, who has some FASD-related physical issues and was diagnosed with speech delay.

“His first word was ‘Mom’ at nine [months], then at 18 months he was only able to say the same word,” Corbin-Boucher said.

She emphasized the importance of “the balance between how much we do and how much we expect,” explaining that parents have to think about what success means for FASD kids.

“It might not be a high school education,” she said. “Sometimes success is getting out of the door on time.… Sometimes it is getting dressed or passing a course.”

The last to speak was Dr. Nicole LeBlanc, medical chief of staff and medical director for the NB FASD Centre of Excellence.

LeBlanc talked about the process of FASD diagnosis, which has evolved from looking at FASD as a condition that could be seen in facial features, to considering it as a disease of the brain, and most recently to talking about it as a total-body condition.

At the end, attendees had the opportunity to ask the speakers questions and give feedback on the discussion.