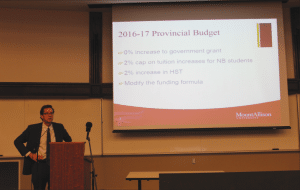 Mount Allison University could face a $1.1-million deficit in the 2016-17 year, according to an outlook provided by university budget manager Chris Milner last week. In Milner’s budget outlook, a 2-per-cent tuition increase for all students was calculated, though no decisions have been made by the university.

On Feb. 9 and 10, the university administration held two town-hallstyle budget meetings. Mt. A VicePresident Financial Affairs Robert Inglis hosted the meetings alongside Milner. The meetings were open to faculty, staff and students who, after a short presentation, had the opportunity to ask the administrators questions.

“Everything is an option. We have the authority to put up tuition for New Brunswick students by more than 2 per cent,” said Inglis. “I cannot see that happening, because the province would have a strong opinion about it. We have got to do the work to figure out what we’re going to do.” Inglis said that the “definition of a New Brunswick student” would have to be discussed among the four N.B. universities in order to remain consistent.

Though this is not an ideal situation, Inglis said there had been talk earlier this year of 5-10 per cent cuts in governments grants, so he had been anticipating a worse outcome.

Unaccounted for in Milner’s outlook was the 2-per-cent HST hikewhich will impact certain aspects of the operating budget, he said, namely the budget for utilities. Milner said he does not want to call the possible $1.1-million deficit a projection, as it is very early on in the budget process.

Stephen Law, head of the economics department, asked about legal fees paid by the university in the past few years. Inglis said the university ended up having to dip into the contingency fund, which is reserved for covering shortfall in tuition revenue and dealing with unexpected emergencies. He said when looking at the budget for legal fees for next year, the university will have to “look at what makes sense.”

Marc Truitt, the university librarian, said a possible aid to the situation could be the implementation of furlough days. Speaking from experience at the University of Alberta, Truitt said that faculty and staff could agree to a certain number of unpaid work days per year, which could alleviate some of the budget pressures. Inglis said it was an interesting suggestion which could be further considered.

Inglis responded to other questions around student recruiting and ideas for generating revenue. Gloria Jollymore, vice-president university advancement, spoke about strategies for appealing to long-term donors and growing university endowments. Jollymore gave the example of the Meighen Centre, which is now run solely on endowments and is unaffected by budget troubles.

Owen Griffiths of the history department asked about the university’s stance on taking out loans. “Borrowing money tends to be reserved for cash flow reasons, not for budgets,” said Inglis. “We don’t have any cash flow problems. Debt is a tool, whether it’s an appropriate tool to use I don’t know. We are loath to do it because Mt. A got in trouble using that tool many years ago.” Inglis said if a loan allowed the university to do something that made sense, it could be an option.

Concerns were raised around what would be prioritized when drafting the budget. “We have tried really hard to maintain the amount we are putting into our facilities, because we know we are not putting enough in,” said Inglis.

Truitt said he is really concerned that, in this process, those members of the Mt. A community who are most vulnerable to layoff will not be sufficiently protected. “That’s the challenge,” said Inglis. The best way to address this would be to keep it in the conversation throughout the budget process, he said.

The budget process culminates in the week of April 4. In drafting the budget, the university will look for options for expense reduction and increase in revenue. In open meetings for faculty council and Senate, students, and staff, the budget advisory committee will gather feedback from the community. The draft budget then goes through various board committees and is approved in May.