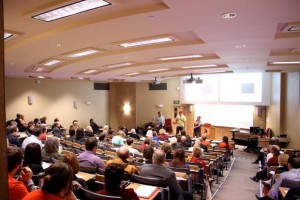 University faculty from across the country gathered in Sackville on Saturday to participate in the Association of Atlantic Universities’ annual “teaching showcase,” hosted by Mount Allison University.

The theme of this year’s conference was “Assessment: Teaching, Learning, and Quality.”

“Fair, open, valid assessment is crucial to universities. Grades are given, degrees are granted, careers are affected by the assessment criteria we establish and apply,” conference organizer and Director of the Purdy Crawford Teaching and Learning Centre Eileen Herteis wrote in an email Monday.

While presentation topics could cover assessment of learning, teaching, programs, or other related topics, Herteis noted that the majority of the sessions dealt with “broadly speaking” with assessment of student learning.

Fourth-year student Nicole Mostofa was one of ten student volunteers who assisted with the conference. Mostofa said that the talks she enjoyed most dealt with “[…] putting students at a disadvantage by assessing them, because not everybody has the same kinds of abilities. By assessing everyone in the same way, it’s advantageous to some, and disadvantageous to others.”

Mt. A faculty members Andrew Nurse and Owen Griffiths, of Canadian studies and history, respectively, collaborated on talk that dealt with the uses of student assessments of teaching.

“What I was interested in was whether or not we can use student evaluations of teaching, not necessarily to assess teachers, but to figure out what different kinds of learners are in the classroom,” said Nurse.

In an interview, Nurse said he believes the high attendance at the conference spoke to a broader concern among faculty regarding the postsecondary education system. “I think that this indicates that faculty are looking for a different way of approaching teaching.”

Nurse argued that while the university experience has changed dramatically, with greater emphasis placed upon extracurricular activity, exchanges, and so on, the system within which these changes are taking place has largely remained static.

“I think that there’s a desire to pause and think about whether this structure can carry the load that’s being placed upon it,” said Nurse.

Over 120 people attended the conference. Forty-one sessions were held  during the one-day event, and participants chose between a number of concurrent talks throughout the day. Fifteen Mt. A faculty hosted sessions on their experience with assessment in the university context. Seven students also hosted or co-hosted sessions.

The conference also featured a performance by Mt. A’s bilingual student theatre troupe Tintamarre. They preformed a play written specifically for the showcase entitled The Test. According to the program the play deals with a study group made up of common “character types” one finds at university, such as “the perfectionist” and the “smug slacker.”

Fourth-year student Ryan Mitchell was an actor in The Test. He said that one of the central ideas they wanted to convey was that “education should move away from a one-size fits all assessment.”