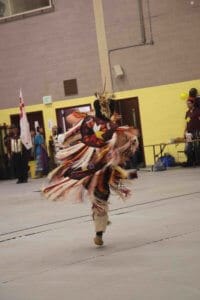 Mount Allison celebrated First Nations and Métis culture with the University’s first Powwow on Thursday, March 22. A Powwow is a gathering of Indigenous Peoples that celebrates cultures and honours traditions. The celebration includes traditional dancing, music and crafts and is open to everyone.

The day began with the permanent raising of the Mi’kmaq flag beside the Canadian flag on campus. The Indigenous Student Support Group raised funds to pay for the flag and the second flagpole.

“Students took the initiative to raise this money, and that really proved how serious we were about this,” said Emma Hassencahl, the Indigenous affairs coordinator at Mt. A. “It proved how much students wanted it on campus as a representation of themselves and the land that this university occupies.”

Laylia Bennett, co-president of the Indigenous Student Support Group, was also touched by the flag raising. “I almost cried when they raised the flag because seeing [the flag] is just so significant of us being recognized as traditional custodians of this land, and it’s really amazing to see,” she said. “Change is happening.”

Those who attended the flag raising then walked together to the Athletic Centre, where the grand entry was held. The Powwow’s head female dancer, Amanda Reid, and head male dancer, Dion Bernard, led all the dancers of the Powwow into the space where the celebrations were held. After the opening ceremonies, master of ceremonies Possesom Paul announced the many different dances that occurred throughout the day. These dances included the women’s dance, the men’s dance, the round dance, the candy dance for children and the inter-tribal dances.

The inter-tribal and round dances encouraged all the guests to dance in the circle. “I have a deep appreciation for the round dance, because it brings everybody together and I think that was one of my favorite parts,” said Hassencahl, speaking to the significance of the dance. “It got so big that we had to make two circles.”

Bennett, who was also a vendor at the Powwow, was able to watch the festivities. “It’s been really nice to see everyone come and support and just have fun and come together and experience First Nations culture,” she said. “I don’t have a lot of words for it – it’s just awesome.”

This particular Powwow was intended to share First Nations culture, customs and Protocols with the Mt. A community. “We wanted it to be rooted in learning and give the opportunity for non-Native people to come in and learn from us and celebrate us at the same time,” said Hassencahl. “I think there was a lot learned that day about who we are.”

“I’ve learned how important it is to just sit back and listen to people because then you get to see all the different perspectives,” said Kawama Kasutu, a non-Indigenous student who attended and helped organize the Powwow. “If I wanted to make friends and I didn’t listen to what they had to say, I don’t think I would be here today. Listening is important.”

The Powwow was organized by the Indigenous Student Support Group over the course of the Winter semester. “It was truly a group effort,” said Hassencahl. “We all sat down together each week and talked about the progress. Everyone contributed ideas in the support group. Everyone helped to spread the word and put up posters, decorate the gym, and it was all hands on deck the day of. The students were so amazing throughout the entire organizing process.”

Although there was a snowstorm the day of the Powwow, students felt the spirit of the day was unaffected. Dominique Poitras, a member of the support group, said, “The snowstorm didn’t really affect the day. Everybody who was there saw [the Powwow] as something important, and they made a point to be there regardless of the weather.”

While there are no official plans in place, many members of the Indigenous Student Support Group are hoping for more Powwows in Mt. A’s future. “I’m sure that this group of students is going to make it happen again,” said Hassencahl.

The Powwow was an important day for Indigenous students on campus. “[The Powwow] was really significant for the students who really deserve to have their culture appreciated. It made them feel very proud,” said Hassencahl.