Mt. A still top in Maclean’s 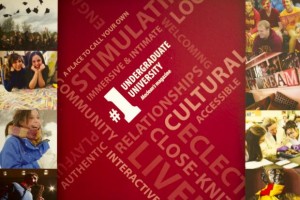 Mount Allison University has found itself atop Maclean’s primarily undergraduate category for the 18th time. Robert Campbell, Mt. A’s university president and vice-chancellor, announced the first-place finish to members of the university community in an Oct. 29 email, saying, “I am delighted to inform you that Mount Allison has once again been ranked the No. 1 undergraduate university in Canada by Maclean’s magazine.”

Campbell said the university’s dominance of the primarily undergraduate category, finishing first 18 of 24 years, is “a record of sustained excellence unsurpassed by any other university.”

Campbell spoke to The Argosy about the significance of the rankings to the university. “Every year since I’ve been here it’s been No. 1, and its become part of the brand, part of the identity,” said Campbell.

Campbell said the magazine usually releases the results to ranked schools in advance of the public announcement. “Maclean’s understands what impact this can have, whether its good news or bad news, and they try to give people a day or so heads up so they can get their press releases ready and that sort of thing,” he said.

“This year I happened to know a week earlier, because they interviewed me because they wanted some text from the schools that ranked number one, so the only way they could do that and get it to press is to interview us a week or so before,” said Campbell. “I was sworn to secrecy for obvious reasons, since they wanted it to be a big splash.”

Maclean’s outlines its ranking criteria in a 2013 article written by senior editor Mary Dwyer entitled “Measuring excellence.” The 49 universities ranked in the magazine are separated into three categories based on the number of programs offered. “Primarily Undergraduate universities tend to be smaller in size, and have fewer graduate programs and graduate students,” compared to the larger, more research and graduate student intensive universities considered “Comprehensive” or “Medical Doctoral.”

Mt. A’s marketing strategies, and the strategies of a number of universities across the country, have focused heavily on the Maclean’s rankings. Campbell said maintaining a national presence has been a very deliberate project for a school as small and relatively isolated as Mt. A.

“We’ve been self conscious about [national reach]. I think we do events better than we’ve ever done before. For example, the opening of the Purdy Crawford Centre got national attention.” Campbell also pointed to Mt. A’s strong record of winning student and teaching awards, such as the university’s 52 Rhodes scholars, as being important for a national presence. “There’s a kind of grand identity, justified or not, that we’re a Rhodes Scholar school.”

National reputation is a crucial component of the ranking process. One-fifth of the final rankings is determined by the results of surveys sent to “university officials at each ranked institution, high school guidance counsellors from every province and territory, the heads of a wide variety of national and regional organizations, and CEOs and recruiters.”

Campbell said those who take the survey across the country, particularly business people and university officials, believe Mt. A is well administered. “Everybody in the country knows that Mount Allison’s got a great endowment, no debt, opens its buildings – like the Purdy Crawford – pretty much paid for.”

Campbell said the student-teacher ratio at a university is important for a number of reasons. “The student teacher ratio is a kind of a metric for a whole bunch of other things. We’re not very well funded, our tuition is capped, so there’s not much flexibility in how much money we’re getting.” Campbell said Mt. A’s approximately $150 million endowment and lack of debt means the university can invest its operating budget a larger full-time faculty. “Your student teacher ratio tells you a lot about how we’re allocating our money internally.”

A further 20 per cent is dedicated to judging the quality of faculty at institutions. Eight percentage points of this is decided by how many teaching awards are given to full time faculty, while the other twelve percentage points are distributed between research grants between the Arts and Science faculties.

“Resources” compose a further 12 per cent, with six percentage points dedicated to “the amount of money available for current expenses per full-time-equivalent student,” and another six to total research spending.

“Student support” comprises 13 per cent of the final make up and distributed evenly between “the percentage of the budget spent on student services” and scholarships and bursaries.