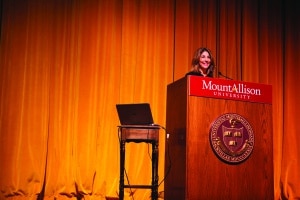 On Jan. 26, Naomi Klein, award-winning journalist and author of the bestsellers The Shock Doctrine and No Logo, spoke as part of the President’s Speakers Series at Convocation Hall. Over 500 students, faculty and members of the Sackville community attended, as well as others who had come into town specifically for the event. Klein’s public lecture was based on her new book, This Changes Everything: Capitalism vs. the Climate, in which Klein writes on how climate change and capitalism are inextricably linked.

“The really inconvenient truth is that it’s not about carbon—it’s about capitalism,” said Klein. “The pillars of the neoliberal project are still direct barriers to what we need to do about climate change.” Klein spoke passionately about the present and how it’s a time when we need to invest in renewable energy, make public transit free, and take leaps toward reworking our economic system, but instead we are corporatizing and privatizing our institutions, a category which includes universities.

Klein also focused on the opportunity climate change offers – the potential to unite climate action with social justice movements considering, in her opinion, the necessary upheaval of the current economic system. “There are so many arguments against this economic system and on top of it all it’s destroying the planet,” said Klein.

While Klein sees conflict between capitalism and climate change, she also argued that “capitalism can bring us a gift.” When busts in the economy occur and the price of oil falls drastically, fracking and drilling become almost unaffordable, said Klein. She also said this might probe individuals and corporations to begin to consider other, less polluting industries.

In regard to fracking, Klein spoke specifically about New Brunswick. “I was distressed to learn about the firing of your chief medical officer who has been an outspoken critic of fracking,” said Klein, referring to Dr. Eilish Cleary, who was put on leave without evident cause last December.

Klein also spoke about the recent Paris Agreement, which was negotiated during the United Nations’ 21st conference on climate change, and adopted by consensus on Dec. 25, 2015. While Klein said the agreement “could have been worse,” and that it set the ambitious goals the international community needs, she noted a disconnect between the goals of the international community as a whole and those of individual countries.

According to Klein, if all countries’ emission goals are added up, emission levels are such that they surpass the 1.5-degree goal by a further three degrees, approximately. “They set the goal and then stomped all over it simultaneously,” said Klein. She also noted that the words “oil” and “coal” did not appear once in the Paris accord, and compared this to having an agreement on lung cancer which doesn’t mention cigarettes.

Klein spoke positively of newly appointed Minister of the Environment and Climate Change Catherine McKenna’s role in the Paris Agreement. McKenna was the first to push for a 1.5-degree global warming target, as opposed to the previously agreed upon 2 degrees. However, she stressed that Canada now has a special responsibility to act on our emission goals, because we “dangled the 1.5 degrees in front of disappearing nations.”

Klein spoke at length about the fossil fuel divestment movement, remarking that she had never seen a movement spread so quickly. Since 2012, when Bill McKibben launched what has become an international fossil fuel divestment campaign, over $3.4 trillion have been removed from fossil fuel investments. However, Klein emphasized that even when the ultimate goal of divestment is not reached, university communities are winning by creating a context for policy victories. This, according to Klein, is what the entire movement is about: removing the social license of fossil fuel companies and delegitimizing their profits.

Toward the end of her talk, Klein called on Mount Allison to be the first Canadian university to divest from fossil fuel industries. “I really do believe that you should divest, and I want to say that in front of your president,” stated Klein. “You have to divest.”