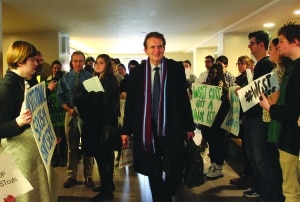 Over 100 hundred hands shot up in the air when Katharyn Stevenson, the president of the women’s and gender studies society, asked who would be willing to protest outside of the Board of Regents (BoR) meeting the following morning. Students gathered in the basement of Avard Dixon last Thursday, Feb. 4, to discuss a demonstration in support of the jeopardized women’s and gender studies (WGST) minor.

On Monday, Feb. 1, Mount Allison’s dean of arts, Hans vanderLeest, informed Lisa Dawn Hamilton, acting director of the WGST program, that there was to be no staffing budget for the 2016-17 academic year for the program. Hamilton then sent an email to students currently enrolled in the program, informing them of the lack of funding.

Students immediately took to social media, expressing frustration and opposition to the announcement. Within hours, a petition was created to save the minor, which now has almost 7,000 signatures in support of the WGST’s continued funding. Student action culminated on Friday when over 80 students staged a silent demonstration before and after the BoR meeting.

The number of declared minors in WGST has more than tripled in the last two years. In the fall semester of 2013, the program had 13 declared minors; it now has 44. Much of the outcry and organization came from these students.

Stevenson spearheaded much of the student mobilization.

“Student action is really important because we are being directly affected by this issue,” she said. “I think this is kind of like a breaking point for a lot of people.”

The minor was founded in 1999 by Marie Hammond-Callaghan. When Hammond-Callaghan went on sick leave in 2014, the funds earmarked for her full-time position remained in the program’s budget. A month after she passed away in November, these funds were redistributed back into the budgetary pool for full-time staffing.

Tasia Alexopoulos, a sessional instructor who currently teaches every WGST course at Mt. A, filled in for Hammond-Callaghan in 2014. For the last two years, Alexopoulos has taught the minor’s core courses on mostly stipend pay—a sum of approximately $6,000 per course. As staffing is the only substantial component in the minor’s budget, the purported lack of funding pertains directly to her compensation.

“She really is shouldering the entire minor,” Hamilton said. “So this program is resting on part-time contractual labour that has mostly been on a stipendiary basis.”

Students and faculty who have expressed support for the minor said they feel that the university’s treatment of Alexopoulos has been unfair.

“We have one professor in our women’s and gender studies department, and she is so undervalued,” Stevenson said. “She does so much work for the little that she is paid.”

Students and faculty stressed that this case is not isolated, but is emblematic of larger systemic trends across campus. Increasing reliance on part-time contractual labour, they said, is an example of administrative austerity measures imposed on faculty and staff.

“[Part-time professors] are not treated well,” Stevenson said. “So if this movement can also speak for the professors that we care about and that do so much for us. I think it’s a way for us to express solidarity.”

In response to the public outcry and national media coverage the administration sent out two emails, one with a linked FAQ page, to the Mt. A community. The communications stated that the university had no intention of cutting the program. They assured the community that the formal review required to cut a program had not taken place. The email reasoned that “Mount Allison faces budget challenges and is exploring ways to most effectively deliver its academic programs.”

vanderLeest initially met with Hamilton a day before the provincial budget was released. He told her last Monday, Feb. 1 that there was currently no funding for staffing the WGST program, and therefore no courses would be offered in the coming year if the budget did not change.

vanderLeest said the problem is not that money is being taken away from the program’s budget, but rather that there is no money in the budget to begin with. With the new budget announcement, vanderLeest said he will now begin searching for funds to put towards the program.

“I’m not cutting the program right now. I’m trying to find ways to sustain it,” he said. “We have to continue to be creative in looking for solutions that can keep us moving forward.”

On Thursday, Feb. 4, vanderLeest announced that the administration had discovered funds to pay two stipends for the minor’s core courses in the upcoming year.

The program’s steering committee has made it clear these proposed stipends are not a feasible way to ensure the longevity of the program. They are formally requesting a full-time temporary position and further arrangements for the hiring of a tenure-track professor for 2017-2018.

vanderLeest said “no specific program or department has been singled out” in the budgeting process.

However, while other departments have started tentative time-tabling for the upcoming academic year, the WGST program has not. Students can only register for the minor if they have six or more credits from the four core women and gender studies classes. Leslie Kern, the former acting director of the program, said “to suggest that every program is in limbo right now I think is disingenuous.”

A group of 47 faculty members and librarians have signed an open letter condemning the administration’s response to student and faculty protest. The letter criticizes the university’s attempt to dispute the effects that these financial cuts would have on the program. It asserts that the two stipends recently offered by the administration will leave the program in a precarious position in the long-run.

The letter argues that “rather than directly addressing the funding decision and its consequences for the university, they have misled and misdirected, resorting to the corrupt techniques of doublespeak to disguise the truth of the situation and to evade responsibility for it.”

Jane Dryden, philosophy professor and member of the WGST steering committee, said the purported lack of funding indicated that the minor was not a priority. She said the proposed budget cuts will make it easier for the administration to justify the discontinuation of the minor. “We know that the best way to cut a program is to starve it and then say it wasn’t doing very well.”

The dispute has moved students and faculty to defend importance of the program.

Alexopoulos said the minor is about more than just academics; it is about creating “a campus and a community that reflects the values of many, not just a chosen few.”

On Friday morning, over 60 students trudged through the snow to stage a silent demonstration outside of the BoR meeting. They lined up along the railing of the student centre foyer, holding signs demanding the continuation of the minor.

“It’s one thing to see numbers on a petition, but seeing people actually show up at 8:30 in the morning is really great,” Stevenson said. “If we don’t show up, it’s easier for them to make decisions that go against our wants and desires as students.”

Students gathered again at 11:30 a.m. to engage board members as they left the meeting. After waiting over an hour for the meeting to end, board members left Tweedie Hall one at a time, often stopping to converse with protesters. Robert Campbell, Mt. A’s president, was one of the last to exit the room.

“One can’t help but be impressed by how galvanized the students have been, and how articulate they’ve been,” he said in a later interview. “And I don’t want to say that in a condescending way.”

When she left the four-hour meeting, Willa McCaffrey-Noviss, a student representative on the BoR, said, “the student demonstrators today completely shaped the discussion in that meeting like I’ve never seen.”

Student activists attended the town hall budget meetings on Feb. 9 and 10, and will possibly demonstrate at the Senate meeting on Feb. 16.