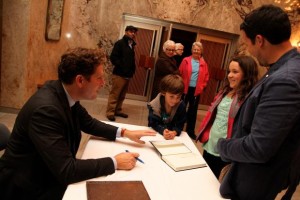 Prior to his speech, Feldman was hosted at Black House by University President Robert Campbell, where he dined with winners of a contest for students. To win, students had to submit a short piece explaining why they wanted to dine with Feldman.

Tyler Stuart, one of the three contest winners, said, “if they do this again I would encourage students to apply.” Alex Economou, another contest winner, said he was “very lucky to be sitting at that table.”

Though Feldman is a specialist in Islamic philosophy and law, his talk focused on the changing dynamics of the global political system due to China’s rise to power. This is the subject of Feldman’s book Cool War: The Future of Global Competition. He explained that a “cool war” arises when the “zero-sum game” of “geopolitical struggle” coincides with the “positive-sum game” of international trade.

To illustrate the major changes in international trade and politics, Feldman pointed to the recent acquisition of Nexen, a Canadian firm, by the China National Offshore Oil Corporation. During the Cold War, such a move would have been unthinkable. He argued that in the current global economy, Canada is not forced to “choose sides.”

Despite characterizing human rights as “luxuries,” Feldman noted that activism will gain more strategic political importance. The talk ended with a remark on the importance of global engagement. Feldman stressed the need to consider “the big challenges that make us want to be active in the world” and the importance of understanding economic issues.