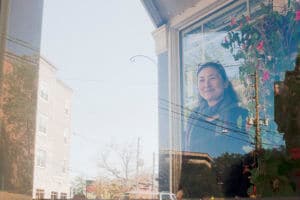 When Naoko Ando, owner of the local used bookstore Rags of Time, announced on Facebook that she was looking for a new owner, she didn’t expect to receive a huge response. “I was quite surprised. The post was shared 220 times,” Ando said. The post exceeded 36,000 views and quickly found a new owner.

Rags of Time was opened 15 years ago by Ando and her late husband Lauchlin MacDonell. “It wasn’t about starting up a business, it was always about books,” Ando said. “He was a book lover, a bookworm. He was always reading and collecting books since he was a kid.”

Ando has had an adventurous life. After growing up in Japan, Ando moved across Canada from British Columbia to the Maritimes, studying ceramics in Newfoundland and then Halifax, where she met her husband. They decided to make Sackville their home and founded Rags of Time. Since then, the bookstore has become a staple for locals and visitors alike.

Since the death of her husband, it became more difficult for Ando to keep the store open. “Within a year of opening the shop, he became ill and he went on for eight years with all kinds of rare conditions. It became very difficult to deal with it. Even just running a day-to-day business was not easy,” Ando said. “We just did whatever we could do to survive, and did the best to keep the doors open to customers, but it was not easy.”

After the five-year anniversary of her husband’s passing, Ando decided it was time for a change. “This year was the 15-year anniversary of the store, so ten years we had the business together, and then for five years I tried on my own.” On July 8, Ando announced the sale of the store via Facebook, and within a few weeks the shop had a new owner.

Miriam Lapp of Tantramar Tarotscopes, most often seen at the Sackville Farmers’ Market, and her partner Stephen Byrne knew right away that buying the store was the right move.

“I saw [the Facebook post] and something clicked in my head and in my gut, and I ran downstairs and I said ‘Steve, Rags of Time is for sale,’ and he was like ‘Oh wow, let’s do it!’ ” said Lapp. “We had both recently graduated from university and we were looking for what was next.”

Rags of Time, now called Blind Forest Books and Novelties, is set to reopen on Oct. 10. The new name signifies the “journey of life, where you go in not really sure what you’re searching for, taking new paths, learning new things and coming to see from new perspectives,” Lapp said. Both Lapp and Byrne are excited to open a self-described “mom and pop bookshop” while maintaining Ando’s reputation for “total knowledgeability” and expanding the bookstore to include Lapp’s tarot business. The couple also wants to host more in-store events with local authors and stage dramatic readings.

Lapp grew up in Sackville and has been a lifelong customer at Rags of Time. Her interest-turned-career in astrology began after reading a book that she picked up at the store a few years ago. “First and foremost, we want to maintain Naoko’s stellar reputation as a quality book store in town.” Byrne said.