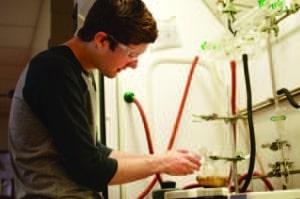 Garrett Muir is a fourth-year honours chemistry student from Halifax – a confident, intelligent young man whose interests and grit have taken him to some fascinating places in his pursuit of research. Muir secured summer research grants for the past two summers, allowing him to stay in Sackville and work on his thesis. Muir’s research entails finding environmentally friendly uses for the waste produced from making biofuel.

Biofuel oil is an environmentally friendly alternative to fossil fuels. One third of the Canadian food industry’s production is organic waste. According to Muir, the oil produced by heating the organic waste from this industry is extremely corrosive and cannot be used directly in a car or anything similar.

In order to be viable, the oil must go through a process called “upgrading.” However, this process also produces waste products. Khashayar Ghandi, Muir’s honours supervisor, and Mount Allison alum Alex Cormier came up with the idea to make the waste product extremely reactive so that it could be used in chemical reactions. The question that Muir had to take on was, “what can we do from here?”

Using computational chemistry, Muir – with the help of Gaussian, a software provided by the university – was able to witness in real time molecular transformations that his professor had predicted.

“This computational chemistry was awesome for me. As a second-year student I knew nothing about it going in, but it was so phenomenal that I had a wonderful time in it,” Muir said. He explained that the method was difficult to learn, but that he thought it had turned out well.

Muir then went out looking for uses of this side product. After scrolling through Wikipedia looking at molecules, he stumbled upon a molecule called diamino pelargonic acid (DAP). This molecule is found in most bacteria and activates the body’s immune response.

The molecule is very difficult to produce from bacteria, but Muir theorized that he could make DAPs from this waste product. After long hours of calculations and computational chemistry, he was on the cusp. He could make the molecule, but couldn’t purify it.

“The long, long-term goal is to potentially take this stuff and turn it into a drug that’s a generic immune system activator,” Muir said.

In theory, a drug of this nature might eventually be able to be used to combat cancer. That said, possible drawbacks to this kind of drug include accidently activating the immune response so that it attacks the body due to a disguised infection. It could also prevent the body from responding to threats by itself, thus inducing a dependence on the drug.

Muir explained that his method of synthesising DAPs is much cheaper than alternatives, as it doesn’t require expensive catalysts. He hopes that industries will take on his research and develop this at a higher scale, as he is leaving this research behind him to study in B.C. after graduation.

Muir will be presenting his work along with other honours students all day on Saturday, April 8 in Dunn 113.