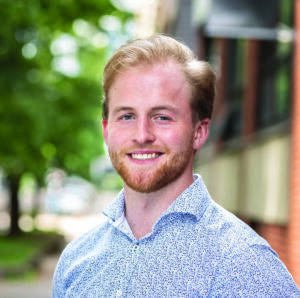 The Frank H. Sobey Awards for Excellence in Business are open to any undergraduate students pursuing business studies in the Atlantic provinces of Canada. Nine awards worth $35,000 each are given to deserving students who demonstrate academic excellence, extracurricular and community involvement, and outstanding entrepreneurial interests.

This year, fourth year commerce student Nathan Robichaud has become the first Mt. A student to win a Sobey award for the second year in a row since 1992. To celebrate this accomplishment, Robichaud was asked about his time at Mt. A, what winning this award means to him, and what he sees himself pursuing after Mt. A.

Robichaud is pursuing a Bachelors in Commerce with Honours in Economics. He was nominated for the Sobey Awards by an internal Mt. A committee headed by Dr. Nauman Farooqi, Mt. A’s Dean of Business and Social Sciences. Having known Robichaud since his second year, Dr. Farooqi calls him “one of the students you take notice of” who “really learns from his mistakes,” a hallmark of the entrepreneur that is a valuable yet rare quality.

When asked about Robichaud’s applying for the award for a second time, Dr. Farooqi said he thought that “it would be unfair not to nominate him again” as, in Farooqi’s eyes, Robichaud’s personal and academic growth had been “exceptionally strong” since last year.

Within Mt. A’s Commerce program, Robichaud served on the Commerce Society in his second and third year and is currently on the Case Competition Society Executive Team for the second year in a row. Outside of commerce, Robichaud is the J.L. Black Teaching Fellow for the Economics Department (TA’ing both micro- and macro-economics and is the Vice President of the Economics Society.

Robichaud asserts that winning the Sobey Award is “an incredibly validating experience,” as “being recognized by some of the most successful entrepreneurs in Canadian history for doing so is honestly overwhelming.”

Robichaud also points out the importance of this award being given to a student at Mt. A in lieu of those at more “established” business schools. “Having the support of such an influential and philanthropic family really gives the students who win the Award a boost in confidence and helps us to overcome the ‘imposter syndrome’ we may have been feeling before,” he said.

While a smaller school, Robichaud believes that Mt. A has provided a positive environment to learn business unlike any other school. He believes that despite the often “cut-throat” world of commerce studies, in the long run “people will remember you more for your soft skills than your technical ability.”

“I think that many other business programs tend to lose that element of humanity in favour of cutthroat competition, but at the end of the day, I’ve had a very positive experience interacting with current and former Mt. A commerce students,” said Robichaud. Dr. Farooqi also agrees that “business needs to be viewed in a community-oriented lens” as it is in Mt. A, a quality lacking in other business schools.

Despite this degree’s competitive nature, the Mt. A commerce alumni network is strong and is absolutely worth digging into. “I’ve been surprised by how receptive alumni have been with respect to virtual meetings as we all try to build our networks purposefully,” says Robichaud. Robichaud might join Mt. A’s alumni network himself one day, as Dr. Farooqi says he is “excited to hear what’s next for him and would love to invite him back to talk to students about his experiences.”

When asked about what’s next, Robichaud replied that he is very interested in a career in finance. Wherever he ends up, Robichaud asserted that he would definitely “give back as much as I can to the communities I grew up in and to organizations that mean the most to me.” Included in these are the friends Robichaud has made along the way at Mt. A. “I don’t think that I’d have been able to make it through Mt. A without the friends I met on my first day here,” Robichaud says. “I’m going to miss the students of Mt. A, but I’m really excited to see where we all wind up, and I’m proud to count myself among them.”

For more information on the Frank H. Sobey Awards for Excellence in Business or to connect with this award’s alumni, visit www.frankhsobeyawards.com.