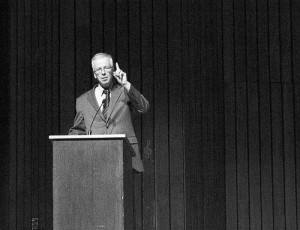 The President’s Speakers Series concluded last Thursday in Brunton Auditorium. The final installment featured, Stéphane Dion former leader of the Liberal Party of Canada. Dion delivered a candid speech on electoral reform, which included his view on the pitfalls of current proposals under the Harper Administration and his own plans for a semi-proportional voting system. “Can electoral reform re-involve Canadian’s in their government? Yes, if done correctly,” Dion said and continued, “what tells us that we need to involve Canadians in their government? Recent studies have shown that the average citizen’s satisfaction with their government has dropped from seventy per cent to fifty per cent in the past couple of years.”

Dion cautioned that not all institutional reforms are for the best. According to the MP, reforms often end up complicating things and introducing unintentional gridlock to an already struggling bureaucracy. Dion cited proposed changes to the Canadian Senate, which would see Senators, elected rather than appointed, as one such mistake. In the past, the Senate has always deferred to the House of Commons stance on bills, since they more accurately represent the Canadian people. “I can count the number of times the Senate has blocked a bill from the house since World War II on one hand,” said Dion. He claimed that changing their positions from appointed to elected would serve only to create the same partisan gridlock that plagues the US government. The US House of Representatives and the Senate are at odds because they hold different majorities, making it impossible for them to pass necessary laws like an acceptable budget. “Introducing this system to Canada would be a mistake,” said Dion.

However, Dion did believe that careful electoral reform was possible, and proposed his own two-part plan to change Canada’s current system to semi-proportional elections.

First, he proposed to lower the number of ridings per province, preventing unfair boundaries that can lead to parties with less than half the popular vote winning nearly all of the parliamentary seats.

The second part of Dion’s plan introduces ranked ballots in national elections. “People have argued that this method is too complicated, but I believe it is not beyond the reach of the average Canadian. You simply rank the competing parties by preference, and rank the officials within your top party. Simple,” he explained. In this system, the party with the smallest votes is dropped and it’s votes reassigned to the next preferred party until the correct number of parties exist. People who might vote green for instance would not lose their vote if their party did not win; the vote would be reassigned to their next preference. This could potentially increase the voter’s investment in the outcome.

The ranked ballot system would also decrease political attack ads, as politicians need voters from other parties to consider them as a valid second choice.

While proportional representation seems like the most democratic choice, Dion agued that it was dangerous on the grounds that it could divide parties along geographic lines, as is the current case in Belgium. Semi-proportional elections force parties to be national by appealing to the needs of each province across the country.

Changes will not take effect by the next election, but Dion hopes that candidates will run with it in their platforms. “Normally, parties who are in power don’t pursue electoral reforms, so, as a Liberal, I have my work cut out for me to convince my own party that this is a good idea.”

Dion concluded his speech with a question and answer period in which he further explained and defended his plan. “The system I have proposed may seem complicated,” admitted Dion, “but it is a change that Canada needs.”