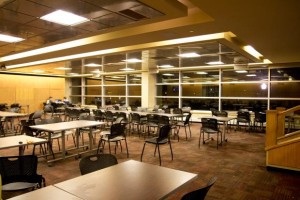 The recently ended strike at Mount Allison University affected not only classes, but also the hours of employees working at the various Aramark-run food services on campus. The dramatic decrease in number of students on campus saw a reduction in hours and shifts for employees, but the Mt. A director of administrative services maintains there was little decrease in the services offered to students.

Brendan Carroll is a part-time employee at Jennings. The second-year student received a dramatic decrease in the number of hours worked because of the strike. “I was working one quarter of the shifts I normally work. It essentially put me down from sixteen to four hours a week,” Carroll said in an interview with The Argosy.

Carroll indicated that some junior full time employees also saw a reduction in hours, saying, “Some of the full timers I talked to told me about reduction in shift length.”

Strain said of the full time staff, “Under their contract, when things slow down, management is allowed to reduce hours in a day.” She also said that not all workers saw a reduction in hours, but that it depended on what role they served in Jennings. The reduction was similar to the procedure followed during the week of independent study each year.

A reduction in hours and shifts for employees is normal for Jennings, as during winter break and reading week the demand for services is reduced. Strain also said that during summer, “[s]hifts and hours are scheduled around the requirements of the Conference Office.” The Conference Office is responsible for the planning of summer conferences on campus.

As Gracie’s Café, the Flying Bean Café, and Jennings Dining Hall are all operated by Aramark, they operate from the same budget, and, as Strain put it, “All are supported by the meal plan fees paid by students living in residence.” Strain said that at busy times in the two cafés, they make enough of a surplus to help lower the cost of meal plans for students.

Strain stated that the cutting of hours provided savings for students in residence, saying, “When there are no sales or vastly reduced sales in the cafés then it ends up costing residence students.” She continued, “Reductions in labour and food costs minimized the losses which means we minimized the costs to residence students. The money goes to them.” The money does not directly go back to students who have already paid, but avoids an increase in the cost of student meal plans.

Despite some complaints from students about a reduction in Jennings choices, Strain’s email asserted that only the salad bar was affected, due to its relocation to the smaller deli station: “The choices were reduced to about 10/11 choices down from 14/15 choices only because the space was smaller.”