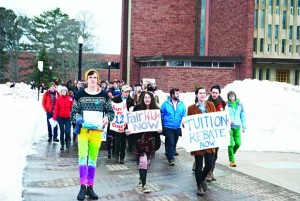 A group of students marched across campus, including a stop outside Centennial Hall, chanting and singing refrains such as: “We want an education, we don’t want no corporation.”

Mount Allison Students’ Union was more involved in this protest than the last, with President Melissa O’Rourke encouraging all students to attend in a mass email. She also addressed the crowd prior to the march. Several executive members and councillors were also in attendance, in contrast to the previous protest, which saw no MASU representation.

“We had a great turnout, and I feel like the spirits were really high,” said Alex Thomas, one of the protest’s leaders.

Connor Wheaton, a student who led the group in song during the demonstration said he felt the protest went “very well.”

Thomas framed the student dissatisfaction within the context of larger concerns about university governance, such as the recent faculty vote of non-confidence. He attributed the higher turnout to multiple factors, such as the MASU email, and general “increasing frustration.”

When asked if there were plans to ensure a large turnout for the final protest on April 11, Thomas said, “We’re going to chalk up the sidewalks, try to get everyone to tell everyone, and frame it as the last protest. A final chance to let it be known that we want a tuition rebate.”

Thomas reported there was some tension between him and the other “Unhappy Mount Allison Students” (an informal group of protest organizers) and MASU, saying, “[O’Rourke] is happy to support the mandate of pursuing a tuition rebate, but she wants to keep it isolated. She totally can’t get behind general dissatisfaction with the administration, which was how I personally framed the tuition rebate issue.” He continued, “She feels councillors have a good taste for whether or not the administration has been listening, and they feel that they have, except for on this issue.”

O’Rourke said she would rather not publicly address Thomas’s statements. “The comments that I made with Alex were made in private, and I don’t know if I feel comfortable addressing those,” she said.

O’Rourke said MASU plans to continue working with Thomas and his fellow organizers to “try and get as many bodies out as possible.”

In a follow-up interview, Thomas said, “I feel it is relevant to contextualize the tuition rebate issue within a broader climate of dissatisfaction about the administration, particularly dissatisfaction coming from faculty.”

Despite this, Thomas said it was important to work for MASU support. After talking to O’Rourke a second time, he said, “whatever message we are coming together about on Friday [will be] something we can all support.”