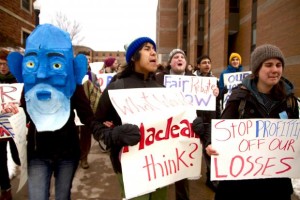 Some students at Mount Allison University have refused to stay silent about the administration’s opposition to a tuition rebate.

Approximately thirty students gathered in front of the Ralph Pickard Bell Library, staging a protest against the President’s Executive Group’s decision to recommend against a tuition rebate for lost class time during the three week faculty strike. Holding signs and adorned with small blue cloth squares reminiscent of the red squares worn by the Quebec student protestors, the students marched around campus during the March 28 protest.

The march began at the library, and went across campus, around the Northside Quad, then took a quick detour through Centennial Hall, the building housing the majority of offices of the university administrators.  The gathering ended on the steps of the student centre.

Conspicuously absent from the protest were any Mount Allison Students’ Union representatives. MASU President Melissa O’Rourke told The Argosy, “It was something that took place during the middle of the day, so not everyone was able to go. There was not intentionally no-one there.”

“With UNB students getting some money back from their university it seems unfair that we won’t be compensated for our lost time” said Rob McDermott, a first year student who participated in the protest. McDermott continued, saying he felt students needed to “make noise” if they wanted a rebate.

“The administration wants us to think that their decision to deny students a rebate is final. It’s not final. It’s their recommendation to the Board of Regents, and this recommendation will be voted on in May,” organizer Alex Thomas told protesters on the library’s steps.

Thomas concluded that the purpose of the demonstration was to convince the Board of Regents to reject the proposal put forward by the President’s Executive Group, made up of the university’s top administrators.

In a March 24 email to students, Vice-President Student Affairs Ron Byrne wrote that the administration was recommending against a rebate because “it is most appropriate to concentrate on meeting individual needs and on providing enhanced services.”

Thomas and others have plans to continue protesting every Friday at 11:30 am until the end of the semester.