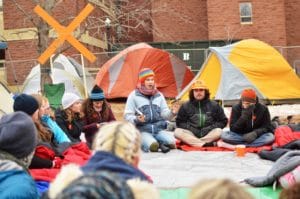 On March 20, 7:00 a.m., approximately 40 Mount Allison students set up tents in the academic quad in front of the R. P. Bell Library, announcing their intention to occupy the space until their demands regarding fossil fuel divestment are met.

Divest MTA has organized an indefinite occupation, demanding that the university cut all financial ties with the top 200 publicly traded fossil fuel companies over five years. Campus security and facilities management have spoken with students, presented a list of rules that the encampment must abide by, and agreed to keep the chapel open all night for the use of campers.

Lauren Latour, Divest MTA organizer and returning Mount Allison environmental studies student, said the occupation is a significant step toward convincing the university administration that divestment is in the best interest of students and the institution.

“This university has promised to provide for its students as best it can, and one of the most important ways it can do that is by divesting from fossil fuels,” Latour said.

Tina Oh, another organizer with Divest MTA, says the current occupation is a reaction to the administration’s unsatisfactory response following February’s Board of Regents die-in. Approximately one month ago, students disrupted a Board of Regents meeting, lying on the ground of Tweedie Hall and announcing that they would remain until their demands were met. The Board decided to adjourn their meeting and did not sign Divest MTA’s list of demands.

As of Tuesday evening, facilities management and campus security have reached out to the protesters, but the administration has yet to formally engage. 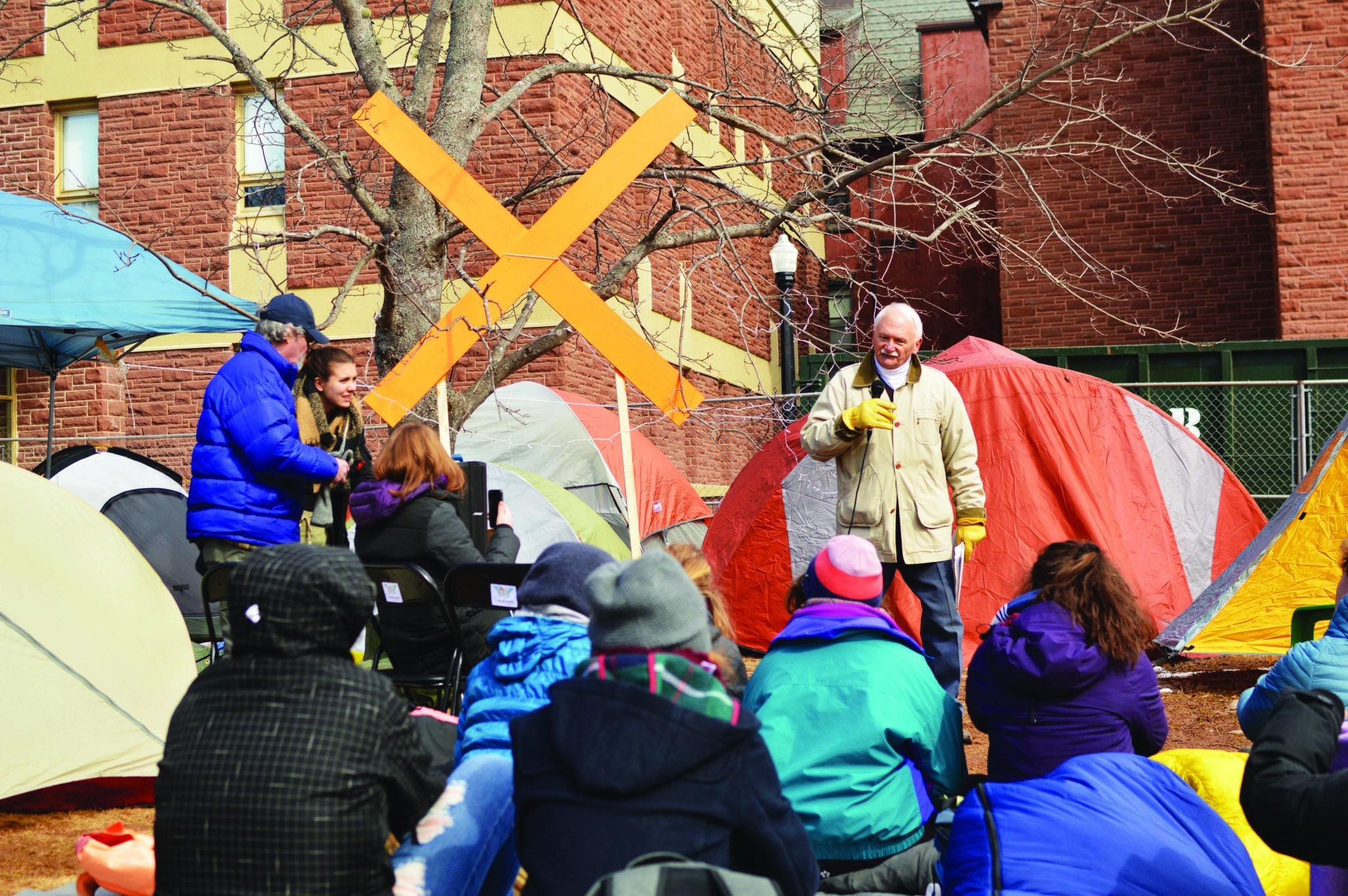 “I tweeted out to President Campbell several times, and also to Kim Meade, vice-president student life,” Oh said. “[Meade] did make an appearance today [Tuesday], but only because, I think, we had asked, ‘Where are you?’”

Fourth-year student and Divest MTA organizer Jamie Dalgleish, who is participating as a protester, said this was the largest direct action Divest MTA has done so far, and she is excited to see the results. However, she noted concerns over President Campbell’s limited remaining time at Mount Allison: “It could be either really easy for him to say ‘yes, Mount A should divest,’ but at the same time, it could be easy for him to push it off to the next president.”

Third-year student and protester Jacob Demers set up his tent at 8 a.m. on Monday morning and stayed through the night along with many other protesters. “It was a little cold last night [Monday], but as long as you’re well prepared it’s not that bad,” Demers said. Despite the winter weather, Demers said the camp is “really welcoming.”

“There are people stopping by, and we’re getting great media attention”.

Timeline of events on the occupied quad: 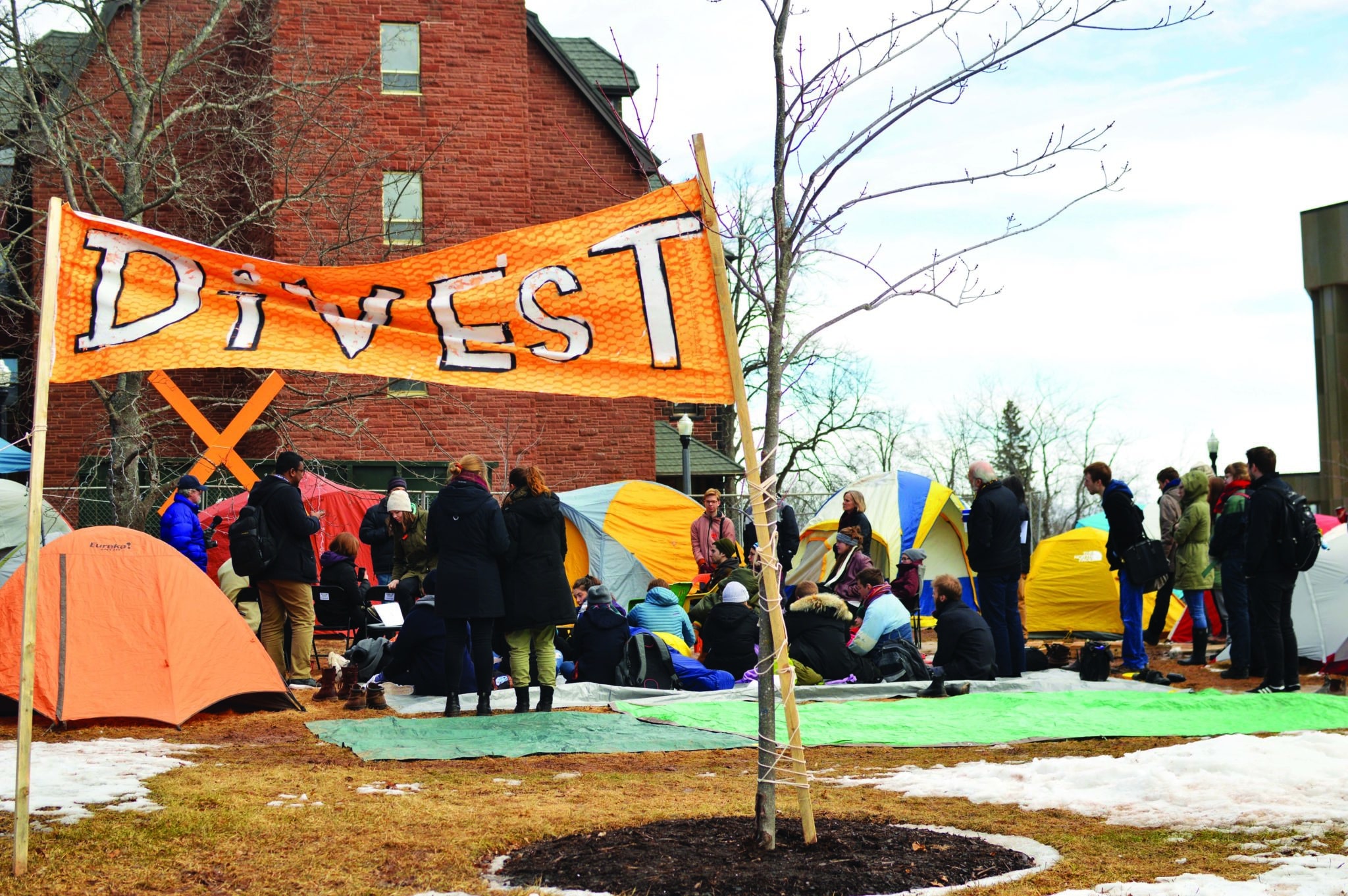 7:00 a.m. – Divest MTA organizers began setting up their tents and the camp amenities – a kitchen tent and a large tarp-covered area in the centre of the encampment for gatherings.

10:20 a.m. – The occupation was officially announced. Emma Hassencahl led a land acknowledgement and Jacob Demers led the group in a round dance and chant.

4:30 p.m. – Mark Nicol held a “Mourning of the Earth” event. Participants were lead in a group meditation to honour their love and sorrow for the Earth.

6:30 p.m. – A dinner of chili and cornbread was served to the protesters and the community.

7:30 p.m. – An environment-themed “eco-poetry” reading was held, with both protesters and community members participating.

11:00 a.m. – A “teach-in” was held with protesters, students, community members, and professors as an environmental education event.

5:30 p.m. – Annie Clair, a water protector from Elsipogtog gave a presentation and facilitated a discussion about climate justice.

6:30 p.m. – A dinner of rice and dahl was served to the camp and community members.

7:30 p.m. – An open-mic was held during an evening of music for the camp and community.

At the time of print, students continued to assert that they would be at camp “as long as it takes” for the university to reconsider their stance on divestment. Further updates on the occupation will become available on the Argosy website.