Talking about the elephant in the room 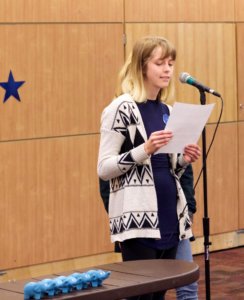 “The reason people back away from treatment is because there’s still much stigma around mental health and mental illness,” explained Claire Genest, a fourth-year student who spoke at the event. She said that events like Elephant in the Room are part of the process of “breaking down that stigma and allowing for more room for growth.”

According to the 2016 Canadian National College Health Assessment, 26.3 per cent of post-secondary students reported having been diagnosed or treated by a professional for one or more mental health conditions in the previous 12 months.

Change Your Mind is a student-run anti-stigma mental health group. Their goal is to raise awareness of mental health issues and to challenge stereotypes surrounding mental illness.

“We run a series of events throughout the year that fall into two categories: awareness and de-stress activities,” explained Rebekah Howlett, the president of Change Your Mind. They help out with the therapy dogs that the Wellness Centre organizes for students.

“[At] Elephant in the Room we hope that students sharing their experiences will help break down the stigma surrounding mental health and mental illness,” said Howlett.

Nadine Robinson, a member of the Change Your Mind exec, gave a disclaimer before the first speech, letting the audience know that some topics of discussion would be quite heavy, and that if anyone needed to step out at any time they could feel free to do so.

Depression and anxiety are the mental illnesses most frequent among post-secondary students, according to the 2016 Canadian National College Health Assessment.

Anna Campbell, a fourth-year student, talked about the impact of trauma and how it is not talked about as often as other mental health issues. “Stigma around mental illness prevents me from talking about this because I don’t necessarily see anybody else out here talking about trauma that’s not veterans or sexual violence victims,” said Campbell.

Toward the end of the event there was discussion about misconceptions of mental health and illness. “Depression medication does not turn you into a zombie,” said Amira Abouleish, a fourth-year student. “I encourage everyone to not give up on medicine because you tried one and it didn’t work.”

Abouleish also talked about the importance of support systems with regard to mental health. “Just being more of an active support system is way more helpful,” she said. “As soon as someone doesn’t reach out, you think you’re a burden.”

“A lot of the time, students attend Elephant in the Room and decide that they want to apply for the event next time it’s held,” said Howlett. “We ask students to briefly explain what they want to speak about.” Anyone can sign up to speak at the event and it is open to any topics students want to discuss.

“The event is about providing students [with] a platform to share their experiences, so there aren’t any requirements for the speeches,” said Howlett.

Students can also apply through other campus mental health groups. “This year we had a member of Jack.org and a member of ACID speak at the event,” said Howlett. Jack.org at Mt. A works to dismantle barriers here on campus and helps educate people on what mental health is and how to take care of it. The Association of Chronically Ill and Disabled Students (ACID) gives support and a lobbying body to Mt. A students who have chronic illnesses or disabilities.

“Elephant in the Room is my favourite event at Mt. A,” said Howlett. “It’s the reason that I joined Change Your Mind. Because for those of us who struggle with mental illness, this event provides a sense of community.”