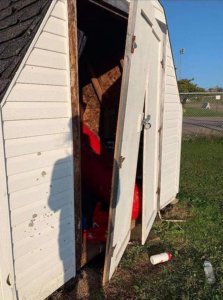 The Mount Allison rugby shed was broken into on the night of Sept. 20, some time between 2 and 6 a.m. About $8,000 worth of personal items and equipment were stolen from the team.

According to Tristen Haley, president and captain of the women’s rugby team, the team had just returned from a game against Saint Thomas and left their belongings in the shed while they went out to celebrate.

“We had an away game in Fredericton on Friday night and we did not get back to Sackville until some time between 11:30 and midnight,” she said. “At that time, a few of us wanted to hit up the nightlife in Sackville.… After we got off our bus, we went to the shed and put away all our balls where they are always stored and a few people left their rugby bags in the shed so they didn’t have to go all the way home before going elsewhere. We put our stuff in the shed, locked it up and went on our way.”

Victoria Sim, a fundraising chair on the rugby executive, was one of the first on the scene the following morning. “The thing that attached the lock was all bent,” said Sim. “You could tell they were trying to pull the lock off, but the lock was still intact so they physically tore the door off the shed and grabbed multiple items.”

The stolen items included all of the team’s jerseys, some cleats, jewellery and an asthma inhaler. Statements were given to the police around 10 a.m. the next morning on Sept. 21.

Although there is no answer yet as to what happened, some team members think the robbery involved a car due to the large quantity of stolen goods.

“They stole 10 to 15 duffel bags’ worth of stuff, plus the shields, which aren’t small, and the bag of jerseys which is pretty big and heavy,” said Sim.

“Essentially, we don’t think it was some drunk person walking by,” said Haley.

Team members felt let down that their items were not safe on campus, even behind a locked door.

“I felt disappointment,” said Shaelyn Carroll, a fundraising chair on the executive. “We thought that this would be a perfect place to toss it in and carry on and get it in the morning.”

“This is a situation where we have been storing our rugby equipment in the shed forever and it has always had a lock on it,” said Sim.

However, members of the team also expressed that they are thankful for the community that has rallied around them after the robbery.

“The school gave us a link to donate directly to the rugby team through the alumni donation process,” said Sim.

“On top of that, the school is loaning us old jerseys from past teams that we can use in the meantime,” added Haley. “And they had quite a stock of old cleats as well.”

“[There’s a] sense of relief that we’ve had so many people contact us and say, ‘How can I help?’ ” said Carroll. “That has taken a lot of the stress off our backs. We’ve had the school support us, the Sackville community, the rugby community … so that’s been a big help as well.”

Olivia Tower, a rookie on the team, is confident that the team will be able to get past this hurdle. “We’re just a bunch of girls wanting to play rugby and have fun,” she said. “The executive has done a really good job to stay cool and handle things well. They haven’t jumped to any conclusions and things have been handled really well. I know we’ll figure it out.”