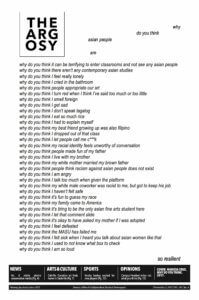 “Mount Allison University has received two Cs, a D, and an F on this year’s Campus Freedom Index rating.” When I initially saw the article being shared around my circle of Facebook friends, I was concerned. Is the school that I have come to call my home really this restrictive of its students’ freedom of expression? I was prepared to drop everything and protest the unjust treatment of Mt. A’s student body.

Then I clicked on the link.

As it turns out, the Campus Freedom Index (CFI), run by legal non-profit Justice Centre for Constitutional Freedoms (JCCF), is not the crusader for justice and freedom that it claims to be. Rather, it is yet another politically motivated attempt to preach hypocritical values and defend only conservative ideals. While there is nothing wrong with an organization that promotes a particular viewpoint, couching their agenda in a supposedly neutral framework is reprehensible.

What caused Mt. A to earn a D rating? According to the Campus Freedom Index’s website, the University’s rating is based on both its Sexual Violence Prevention and Response policy, which bans sexual harassment, and its Racism and Racial Harassment Prevention and Response policy, which bans discrimination, slurs and physical violence. According to the CFI, both of these policies constitute violations of free speech.

Mt. A’s F grade comes from its Student Union Policies rating. The Campus Freedom Index condemns the MASU for following the aforementioned racism policy, and for its election policies. The MASU’s discretion to disqualify candidates for inappropriate conduct was presented as a heinous violation of students’ freedom, rather than a choice not to spend its own money on funding campaigns based on attack ads or slander.

The JCCF was founded by conservative lawyer John Carpay, who, in June 2017, wrote an opinion piece for the National Post. In this piece, Carpay criticized students at McMaster University for protesting in a “noisy” and “disruptive” group outside a talk held by Prof. Jordan Peterson, who earlier that year stated that he refuses to address people using their preferred, gender-neutral pronouns.

Carpay then claimed that the characterization of the protests by McMaster’s president as “peaceful” was “more worrisome than the noisy mob,” pointing to the protests as an example of the silencing of unpopular speech. He also posited that universities are “far too tolerant” of such protests, and that it is disingenuous to consider obstructionist protests an exercise of free expression.

Indeed, few reasonable proponents of free speech believe that all speech should be free from consequences; if someone calls in a bomb threat or publishes libel, they are still responsible for their actions. The same naturally applies to both sexual harassment and racism, both of which constitute tangible harm to others and interfere with the academic environment that the JCCF claims to support. Threatening the safety of students through sexual harassment and racist conduct does not promote learning; rather, it hampers it.

The JCCF clearly understands that some forms of expression are potentially detrimental to the purpose of a university, as per Carpay’s article. Even so, the only expressions of speech that are defended by the JCCF are those promoting conservative views, and the nonprofit’s most prolific cases have all been in defence of conservative speech. The irony of a free speech crusader banning opposing viewpoints is tangible.

Of course, none of this is to say that the question of free speech at Mt. A is of no concern. As students, we must remain vigilant of potential violations of our freedom, and fight back if, and when, such violations do occur. However, the CFI should not be taken as a legitimate measure of any university’s freedom of expression. For now, I would rather Mt. A take measures to avoid an environment of sexual harassment and racism.