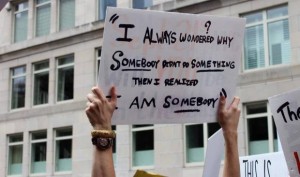 In September, seven Mount Allison students, including myself, joined 400,000 other divestment supporters in New York City to demand action on climate change. We were seven students among 50,000, marching under a banner that read, “Our Future. Our Choice.”

In reality, taking action on climate change at the institutional level isn’t our choice, at least not yet. As our generation is confronted with the greatest challenge that the world has arguably ever faced, Mt. A continues to stand on the sidelines, refusing to take the bold action required to prevent catastrophic climate change.

In keeping our endowment fund invested in the fossil fuel industry, Mt. A is directly supporting an industry whose business model is incompatible with a livable future on this planet. Divestment therefore stands not only as a product of moral imperative, but also as a future-oriented financial decision. In a low-carbon future, the top 200 oil, gas and coal firms will be unable to bring two-thirds of their proven reserves to market. Mt. A is locking us into a future that presents costs we cannot afford to bear.

This Friday, on global divestment day, we, as students, faculty and community members, will stand together to send a clear message that this is unacceptable. Together, we’ll make it known that we are positioning ourselves on the right side of history, and that we won’t stand down until Mt. A does the same.

The task at hand isn’t easy. In fact, it’s really, really hard but complacency is no longer an option. Each day we stand by watching Mt. A uphold the status quo, listening to the oft-cited excuses of ‘fiduciary responsibility’ and ‘political neutrality,’ is another day of emissions, another day of building infrastructure for a fossil fuel-based economy and another day that places our future at further risk.

So here’s our call to action.

On Dec. 5., 2014, you voted unanimously in favour of a Mount Allison Faculty Association motion to support fossil fuel divestment at this institution. In doing so, you positioned yourselves as active allies of this cause. You sent us a clear message that you not only listened to our concerns, but that you saw value in demonstrating what you have taught us: the importance of thinking critically, of recognizing our privilege, and of doing whatever we can, within our power, to build a future that we will be proud of. But a motion of support only goes so far unless it is backed by action. Tomorrow, show us that you not only believe in the education you have provided us with, but that you are actively working to ensure that we have every chance of putting those lessons to use.

To our fellow students:

We know that climate change is the issue of our generation and that no university degree, no matter how prestigious, will insulate us from its effects. As First Nations communities and other marginalized groups occupy the frontlines of climate change, the fossil fuel industry continues to bet on international inaction. This industry is betting on our collective failure to act on the greatest challenge we have ever faced. And until now, the odds have fallen in their favour. But we’re better than this. We will rise to the challenge of climate change, and we will begin building a world that isn’t predicated on social injustice. Only we can’t get there alone. We deserve action from those in power. Our generation, and those that follow, deserve to graduate from Mt. A knowing that this institution is doing everything it can to ensure its students are positioned for long-term success.

There is little left to be said that hasn’t been said before, so instead I’ll leave you with a suggestion for what Mt. A can say when it decides to divest from fossil fuels:

“Mount Allison University prides itself on being not only a place of learning, but also a place of action. It is an institution that encourages students to think critically and to engage with the world’s most pressing issues. It is for this reason that Mount Allison University has chosen to divest its endowment fund from the fossil fuel industry, understanding that it is time for higher education to take a stand on climate change. As Canada’s top undergraduate university, every year, Mount Allison graduates students with the utmost confidence that they are prepared to take on the world’s greatest challenges. For this reason, we no longer believe that it is morally tenable for this institution to invest in an industry that undermines the future success of our students. Instead, we are choosing to lead by action and to invest in a world that we feel proud to graduate Allisonians into.”