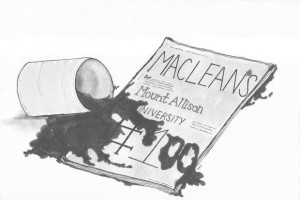 Mount Allison is one of the best places to get an undergraduate education in Canada. Of course, this is based on my view of what it means to be a quality school.  Maclean’s magazine has ranked Mt. A as Canada’s no. 1 undergraduate university for 17 years in a row now. The ranking is still fundamentally their opinion as their chosen criteria is weighted subjectively. Different schools suit different students, and Mt. A should promote what makes it unique rather than continuously stating that it’s simply the best.

Mt. A treats its rank like it is a fact to the extent that its promotion borders on arrogance. Mt. A’s students are smart, with an average GPA of 85 per cent. I would expect a student body of this calibre to make the distinction between empirical facts and subjective rankings. Trying to depict the Maclean’s ranking as fact is almost an insult to the student body’s intelligence. The average entering grade of high school students in 2013 was 86.3 per cent and I would expect them to be equally capable of interpreting a subjective ranking for what it is – an opinion. Yet, the university continues to try to convince students and visitors alike that Mt. A is the best by plastering the number one all over the school campus, website and social media.

What makes a great university should not be defined solely by the criteria used by Maclean’s. We have an incredibly active and involved student body and the diversity of our academic programs is largely unmatched by other schools our size. Both the town of Sackville and Mt. A consistently have events going on. These cultural activities – among other things – are what make Mt. A a great school and a great community, and yet they are not factored into the Maclean’s ranking.

There are also some areas in which we certainly aren’t no. 1. Mt. A falls behind other schools with its lack of a sustainability officer, leaving environmental initiatives to students involved in the sustainability committee and to decentralized campus staff. Access to mental health services in Sackville has been poor for a long time, though this has recently begun to change. Accessibility to academic buildings, for example, for differently-abled students is another major issue on campus. Non-student issues, such as intellectual property rights and the lack of job security for short-term faculty, contributed to last year’s faculty strike and of course, the tuition rebate that wasn’t.

This isn’t to say that these areas can’t be improved upon. Our administrators generally seem to recognize these problems. However, publicizing a no. 1 status is not conducive to an image of self-improvement; rather, it could possibly be misinterpreted as a failure to recognize problems where they exist.

According to the Maclean’s website, reputation is determined by asking “the views of those whose professions put them in a position to form opinions about how well universities are meeting the needs of students and how ready their graduates are ready to embark on successful careers.” In 2013, more than 8,000 reputation surveys were sent to university officials, high school guidance counselors, CEOs and the “heads of wide variety of national and regional organizations.” Only 9.2 per cent of these surveys were returned to Maclean’s, 29 per cent of which were completed by university officials and only 6 per cent were returned by each of the other groups.

Should we really trust less than a thousand reputational surveys, dominated by university officials to say which is the best school in Canada? Does reputation accurately represent what’s going on in a school from year to year?

Mt. A needs to scale back on how it uses its ranking in Maclean’s. It is the areas which make Mt. A a great school that should be promoted, for the sake of accuracy and for the school’s integrity.