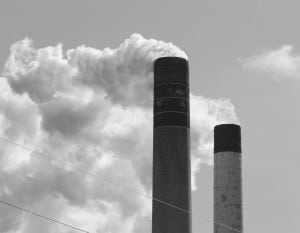 This week, hundreds of motivated students will (hopefully) try to reduce their energy consumption for the C3 Climate Challenge. The focus on  individual action to address climate change and pollution has become intrinsic to the popular notion of environmentalism and doing your part to “save the environment.” While reducing individual energy consumption can be a virtue unto itself, it greatly falls short of the action needed to prevent catastrophic climate change, and is part of the very reason why it is in such a dire state today.

This approach to addressing climate change is exactly that employed by campaigns like C3 and by the popular mentality that it is individual demand that has led to our carbon-based economy.  As Naomi Klein effectively illustrated, unchecked carbon emissions have everything to do with the ever-expanding rise of neoliberal global capitalism and the ever-contracting ability of nations to regulate carbon emitters. This macroscopic power shift from public to private entities has gutted environmental regulations and largely transferred the obligation of reducing carbon emissions to the world’s biggest emitters, a plan you don’t need to be a policy hack to see is deeply flawed. As global governments have been attempting to regulate carbon emissions for decades now, the fossil fuel industry still receives massive operational subsidies and has undue influence on government climate and environment policies.

This literal shift in global power is paired with a mental one as well. The erosion of the social state has corresponded to a marginalization of collective action culture. In short, the mentality that deregulated capitalism is the end-all solution to all our problems has permeated our perspective on social change, and causes us to ask how we can consume differently rather than how we can collectively solve systemic problems.

Turning off your lights and taking shorter showers is all well and good, but it will not confront the true reasons the world has gloriously faltered on addressing climate change. For that, we have to challenge the aspects of our society that have made climate action too little and too late: disempowering states to regulate (or ban) carbon emitters, letting fossil fuel companies continue to operate far beyond the scientific consensus of maximum allowable carbon emissions, and in the worst situations, criminalizing collective action against these problems. The carbon economy isn’t your textbook supply-and-demand market; it is a heavily political system that blurs the line between private interests and government deregulation. Your individual consumption is a drop in the bucket of what keeps fossil fuel companies in profit and in power, which extends to corporate and state entities that will never lower their consumption no matter how much you do.

This isn’t to say that good energy consumption practices are bad; I believe quite the opposite. Even if reducing my personal carbon footprint isn’t going to dismantle the neoliberal world order, I find little else as rewarding from a virtuous point of view. And whether it’s through systemic change of our energy grid or through a climate-fuelled environmental apocalypse, sooner or later we’re going to have to get used to consuming less. I encourage readers to participate in C3 and to apply low-consumption habits in their day-to-day life, if only for their own gain.

So if not through consumption practices alone, how does the average Mount Allison student do their part to usher in the post-carbon world? Look to ways in which you can join or create collective actions that challenge systemic structures which allow carbon emitters to jeopardize our future. The divestment movement is a great place for university students in particular to do this, but as the climate movement continues to gain size and scope, opportunities to join it will multiply. So whether it’s by pressuring our institutions and governments to say “no” to the fossil fuel industry or by blockading a pipeline construction, we need to shift our thinking from “what can I do?” to “what can we do?”