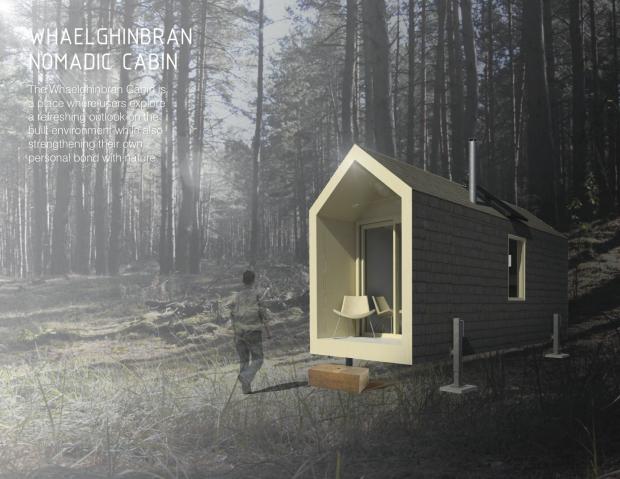 The cabin will be built outside of Sussex, New Brunswick, as the first step in the construction of a “Rural Innovation Campus,” like the one CFI has already built in Tanzania.

“We came up with the idea to have a physical space, called a Rural Innovation Campus (RIC), where we want to bring all these technologies and kind of use the Silicon Valley concept of a tech accelerator where there’s mentoring, support, funding, resources,” Schnurr said.

The success of the Tanzanian campus lead CFI to construct a similar one in New Brunswick. Schnurr said, “[W]e decided we would take what we learned in Tanzania and try it here, which is kind of the opposite of how international work usual goes, but that is kind of our style.”

CFI purchased the land, Whaelghinbarn Farm, in 2012 in order to preserve the property that had been used for organic farming and restoration forestry for forty years. Schnurr added that the design competition was seen as an opportunity to begin innovating before construction even began: “We thought, why don’t we start the innovation process with our accommodation?”

CFI decided to crowd source designs for the eco- friendly cabin. Fifty-seven submissions were made, with contributions from as far away as Japan, Poland, and Spain.

Fisher donated his winnings to CFI. In a CFI release on their website, he said, “As a designer I really appreciate the generous prize for competitions such as this one and the effort to find a sponsor.” Fisher continued, “I would, however, like to donate the entire amount to CFI. I was unaware of CFI’s initiatives until this competition and have come to really appreciate the work that has been done and goals for the future.”

Fisher’s “Nomadic Cabin” design sleeps two to three people, is transportable, and is projected to cost between $6,600 and $8,500 to build. One of the contest’s judges, Craig Applegath, an architect, said of the cabin: “The Nomadic Cabin entry meets all of the competition requirements in spades. It is compact, easily constructed from local material, is easily movable, and is beautiful.”

Construction on the cabin will begin in the spring. “We’re going to start as soon as the snow melts, and be done by the end of the summer,” Schnurr said.