‘Exploring the forest at night’ 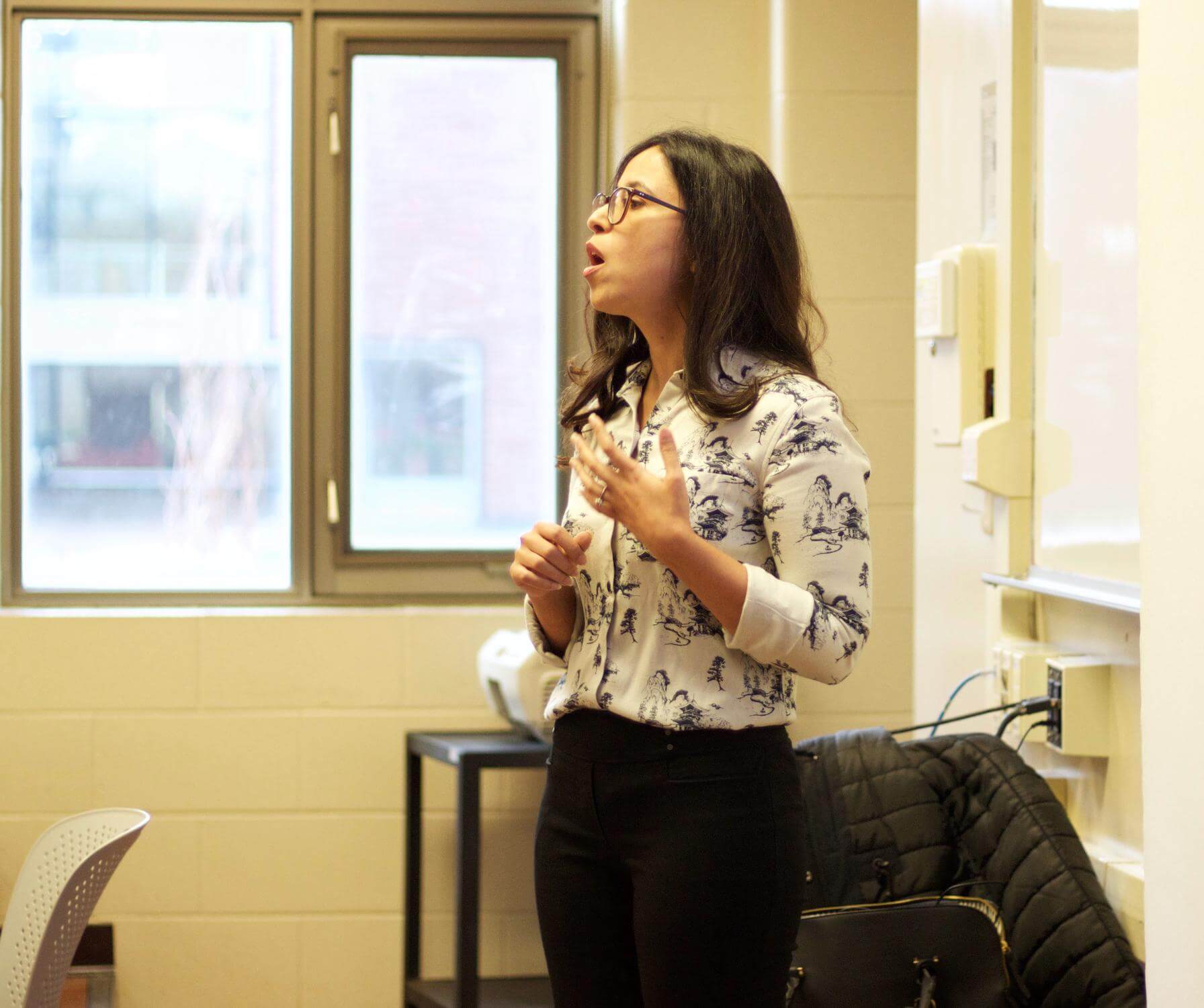 Last Thursday, Dr. Safoura Moeeni, a postdoctoral fellow in the department of economics at Mount Allison, presented her paper titled The Intergenerational Effects of Economic Sanctions.

Moeeni believes that human decision-making is at the heart of many major macroeconomic problems, such as unemployment, low growth rates and low standards of living. She said that in order to address these problems, policy-makers must first consider other decision-making factors.

“We need to know why some people are unemployed and why some people do not even look for a job,” said Moeeni. “What are the effects of this decision on other life-cycle decisions, e.g. marriage and fertility? Knowing causes and mechanisms, we can think of design policies that can change these conditions.”

Moeeni began writing her paper in 2016, after giving considerable thought to the effects of reductions in family income. Interested in the result, Moeeni graphed trends of family income and expenditure in Iran and noticed a massive reduction immediately following the 2006 sanctions. She observed a noticeable reduction in education spending and decided to investigate further.

Moeeni’s paper describes her research on the effects of economic sanctions on parents’ investments in their children’s education. It focuses specifically on the sanctions imposed by the United Nations Security Council on Iran in 2006. These sanctions had significant impacts on the incomes and expenditures of many Iranian families, particularly those working in the highly affected oil and gas sector.

Moeeni concluded that the sanctions decreased Iranian children’s average total years of schooling by 0.2 years and reduced their probability of attending college by 8.7 per cent. Moeeni’s findings indicate that, following the sanctions, families reduced expenditure on education by 61 per cent. Richer households were most affected in terms of expenditure, because many families pulled their children out of private schools and enrolled them instead in the public system. Moeeni’s results indicate that economic sanctions have profound impacts on the education, and subsequent income level, of children from affected families.

Moeeni’s paper suggests potential next-steps for foreign policy and welfare policy. Contrary to the current literature on the subject, Dr. Moeeni states that “Economic sanctions are not low-cost policies.” She adds that “Even when sanctions are smart and targeted, they can hurt the civilian population and these negative effects are large.”

In terms of welfare policy, Moeeni said that policy-makers interested in increasing total years of schooling should make “a big and persistent change in income of poor households.” Moeeni further suggests that policy-makers interested in increasing the quality of education should make similar efforts to increase the income of middle-income households.

Moeeni is an empirical microeconomist whose research interests include labour economics and economic development. She completed her B.Sc. in computer science at Yazd University in Iran, her M.Sc. at the Sharif University of Technology in Economics and her PhD at the University of Calgary.

Moeeni left Calgary for Sackville on the day after her final exam at the University of Calgary in June. She and her husband drove cross-country for six days, arriving in Sackville on a rainy and foggy night. “I felt like we were in a movie,” she said.

Working at Mt. A is Moeeni’s first experience at an undergraduate university. “I like the idea that everything that happens on campus revolves around the student experience, not only on research which is normal in larger universities,” she said. “I enjoy the opportunity to give advice and work with undergraduate students.”

“Research is like exploring the forest at night,” she said, acknowledging the challenged associated with postdoctoral work. “It is fun, but you will fail a lot. Actually, it is not failing. It is just finding the many ways that do not work.”

Economics has long been a male-dominated field. Moeeni acknowledges that women are underrepresented in student populations, research environments and educational institutions, saying that there are barriers in universities, think-tanks and workplaces that discourage women from advancing in the field.

Moeeni believes that there is much more to the problem than women’s preferences. “I believe that it is not only related to preferences, because the share of female economists decreases from undergrad to postgraduate studies and academia.”

Moeeni added that economics is not merely a male-dominated field, but a field dominated by white men. Moeeni cited academic job market data from last year, which shows that Black Americans are significantly underrepresented in economics “because of discriminations in this market.”

When asked what advice she would give to an undergraduate student looking to pursue postdoctoral work, Moeeni said “You need to make sure you have a comparative advantage in doing research and teaching.” She suggested that an interest for solving challenging problems must be accompanied by an interest in teaching others, including students and politicians. “For me, an academic job is a paid hobby.”