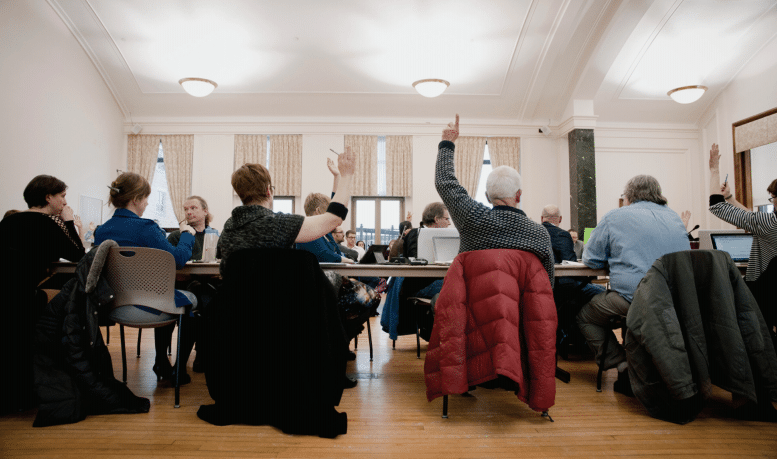 On Feb. 16, Senate voted to defer the motion to change the distribution requirement system back to the academic matters committee for further review. The Mount Allison Students’ Union voted against supporting the proposed changes to the distribution credit system at their Feb. 15 council meeting. Both parties’ concern lay predominantly with the lack of social science courses.

Annie Sherry, MASU’s vicepresident external affairs, expressed concern about sociology and anthropology being in only one category: the social world. MASU President Dylan Wooley-Berry said he felt the distribution system disregarded the social sciences, and said the proposed system was “institutional violence towards the social sciences.”

In December, Senate passed a new framework for distribution credits which would change how distribution credits would be earned. This framework includes eight categories which focus on learning outcomes, rather than the current four categories which represent administrative groupings. These include literature and the arts; belief and thought; the legacies of the past; language, culture and place; the living world; the physical world; the social world; and analytical and quantitative reasoning.

Murphy said, “[The] current system is antiquated and has been in place for decades.” The distribution credit system has been slated to change since 2007. Murphy said this new proposed system tries to get students to take on a larger variety of courses. “Exposing students to a different way of thinking is very valuable,” said Murphy.

The proposal at both MASU council and Senate focused on passing a motion to accept the courses which have been placed within the approved categories. All courses but those in women’s and gender studies, fine arts, art history and commerce have been categorized for the new system. Women’s and gender studies, fine arts and art history have yet not been included because the academic matters committee is waiting to hear back from these departments to determine which category their introductory courses may fit in. The commerce department has decided it will not engage with proposed system for the time being.

Due to broadness of this new distribution system, classes have been cross-listed, which means they can be included in multiple categories. Because of this cross-listing, the new system also says that a course can be counted toward only one category and students cannot count more than six credits from any given department.

Murphy said the academic matters committee aimed to have a similar number of seats in each category. Although there are categories with fewer classes, these classes generally have larger student capacities.

The category of literature and the arts will include Canadian studies, classics, drama, English, French and music courses, similar to the current arts and letters category. Belief, thought and meaning will include courses in philosophy, political science and religious studies. The legacies of the past category is entirely history-based, with only classics and history classes. Language, culture and places focuses on foreign language and studying people and where they live. This includes Canadian studies, all introductory language courses, including linguistics, and geography and the environment. The category of the living world focuses on life sciences with classes in biochemistry, biology, physics and psychology. The physical world focuses on the non-living material world with courses in chemistry, classics (specifically archeology), physics, geography and science. The social world encompasses classes several departments: anthropology, Canadian studies, economics, geography and the environment, history, sociology, political science and psychology. The final category, analytic and quantitative, focuses on more math-based courses like computer science, economics, math and physics.

Dave Thomas, head of the international relations department, said only 9.7 per cent of the courses that have been listed are from the social sciences. Thomas also said the sociology and anthropology departments both sent in requests for their courses to be cross-listed, but were refused.

Alex Fancy, professor emeritus of French, said that the point has been made that only the current distribution system matches the university’s resources and that there should be some consideration of resources that would be allocated when the impact of the changes becomes more evident.