Man arrested for exposing himself to students 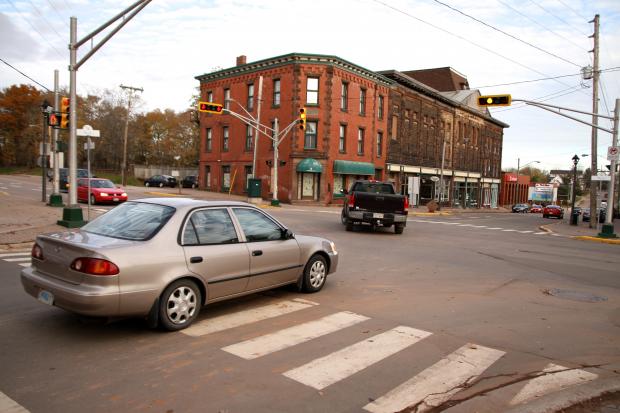 The RCMP confirmed that the arrest was a joint effort between a student report, a report from Mt. A security staff, and an onsite police car.

Mt. A student Julie Kuklas called the police from 12 York St., where she had been watching a movie with her boyfriend. He spotted the PT Cruiser and the pair both ran out the door. While Kuklas grabbed her cellphone and dialled 911, her boyfriend stopped the car at a red light by running circles around it and flagging down a nearby police car.

“It was complete chaos for a minute and a half,” said Kuklas. “The police came around, and we backed off a bit and watched him get pulled over.”

“The creepy thing was that he was laughing,” said Kuklas. “Even though he was getting arrested, [a moment] when most people would have been scared, he was just calm.”

The man has since been released on conditions, one of which is not to be within the boundaries of the Town of Sackville. He is scheduled to appear in Moncton Provincial Court in January 2014.

“Even though he’s not allowed to enter Sackville, I’m still a little concerned because wherever he’s from, there might still be problems,” Kuklas said. “The police wouldn’t release his town or name. This guy could be walking around in Sackville, but unless he’s in his car, no one’s going to know. The description they gave of ‘a man in his thirties with dark hair’ was very broad.”

Catherine Gosselin was the first Mount Allison student to report the incident to the police. Gosselin was walking on Main Street by Swan Pond on Oct. 25 at 11:45 pm when the man pulled up beside her.

“I remember thinking it was a really cute car,” said Gosselin. “He pulled over and asked me where the Marshlands Inn was. We spoke for about two minutes, and started smiling at me and I thought he was stalling for some reason. I was gazing around, not really looking at him, but when he said goodbye I looked at him and he had everything out and was going at it. Before I even realized it he pulled away, and was around the turn before I could get his license plate.”

After discussing the matter with her friend, Gosselin decided to telephone the police.

The following Monday, the same thing happened to another friend of Gosselin’s, prompting her to post about the incident on Facebook and inform the school.

“Afterwards, several people came out and told me that they had the same thing happen to them,” said Gosselin. “I was the first one to call the police about it, but I don’t think I was the first to have it happen to me.”

Kuklas also believed that some girls were too scared to go to the police department by themselves.

“We responded as quickly as we could with an email informing everyone and asking them to notify the police if they saw the vehicle,” said Ron Byrne, Mt. A’s vice-president responsible for non-academic student issues.

“Students had already taken action, and the community that was paying attention were able to help each other out,” he said. “We’ve never had a similar situation in my time here, but I think we handled it well.”

The official RCMP report of the incident filed on Oct. 30 stated that, “in one instance it’s alleged the man was committing an indecent act.” Sergeant James Graves later specified that the police had been notified of two incidents of indecent exposure. The alleged victims will be appearing as witnesses in court. There were an additional three incidents where the man simply stopped to ask directions.

Graves praised the students involved for their actions. “Students were keen and observant enough to make the phone call, they did the right thing,” said Graves.

“Sad as it sounds to say, I’d rather it happen to college-aged women than to children in elementary school,” Kuklas said. Because the alleged victims of the exposures were all over sixteen, the man will be charged with a less serious, summary offence.

“I feel safer knowing he’s not allowed in Sackville anymore,” said Gosselin, “but I walk home earlier than I did before the incident.”